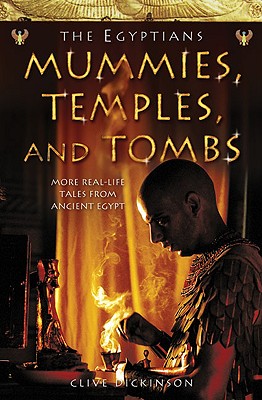 Published to accompany Wall-to-Wall's thrilling, live-action TV series Ancient Egyptians, this entertaining book vividly brings to life the stories of five fascinating people who lived in Egypt over 2,000 years ago, as recorded on original papyrus documents or etched in stone.

The individuals whose lives are so vividly recounted include the royal sculptor Thutmose, who even today is remembered as creator of one of the best known pieces of ancient Egyptian art - the plaster bust of Nefertiti, the heretic pharaoh Akhenaton's beautiful queen. Then there is Wenamun, the priest who set out on an heroic adventure down the Nile in search of materials to build a sacred barge to the god Amun. His life is graphically described in the autobiography inscribed on his tomb which outlines his thrilling voyage and the trading links and lands through which he travelled.

The tale of the young weaver Nakht tells of a short and tragic life. By the time he died aged fifteen, Nakht had suffered both hunger and hard labour. He even had traces of a red powder deep in his lungs - granite - a sure sign of a cruel punishment meted out to him for some minor misdemeanor. Yet there were those that loved him, for his remains show that he had been carefully washed, his face shaved and his nails trimmed before being placed in his final resting place, a wooden coffin that would have cost more than a month's wages.

Other tales include those of Weni the palace official, who uncovered a plot to kill the king, and Pharaoh Nectanebo II, last of the Egyptian pharaohs, who sought to protect his realm through magical ritual.

Clive Dickinson has been a full-time writer for all but six months of his working life. In that time he has written a wide range of books, both fiction and non-fiction, from an Enid Blyton novel to a road safety guide for young children and their parents, and from a popular paperback that explores the fun side of mathematics to another which provides the 'incredible answers' to dozens of 'amazing questions'. In recent years he has found a growing readership in the popular Lost Diary series published by HarperCollins Children's Books. Clive has written four of these, 'The Lost Diary of Tutankhamun's Mummy', 'The Lost Diary of Montezuma's Soothsayer', 'The Lost Diary of Christopher Columbus's Lookout' and 'The Lost Diary of Annie Oakley's Stagehand'.