Farewell Kabul: From Afghanistan to a More Dangerous World (Paperback) 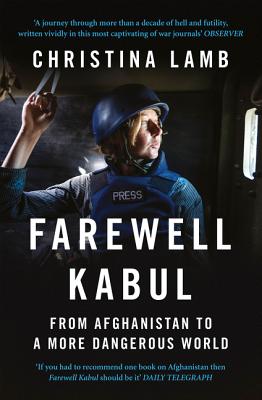 Farewell Kabul: From Afghanistan to a More Dangerous World (Paperback)

From the award-winning co-author of I Am Malala, this book asks just how the might of NATO, with 48 countries and 140,000 troops on the ground, failed to defeat a group of religious students and farmers? How did the West's war in Afghanistan and across the Middle East go so wrong?

Farewell Kabul tells how the West turned success into defeat in the longest war fought by the United States in its history and by Britain since the Hundred Years War. It is the story of well-intentioned men and women going into a place they did not understand at all. And how, what had once been the right thing to do had become a conflict that everyone wanted to exit. It has been a fiasco which has left Afghanistan still one of the poorest and most dangerous nations on earth.

The leading journalist on the region with unparalleled access to all key decision makers, Christina Lamb is the best-selling author of 'The Africa House' and I Am Malala, co-authored with Nobel Peace Prize winner Malala Yousafzai. This revelatory and personal account is her final analysis of the realities of Afghanistan, told unlike anyone before.

Christina Lamb is Chief Foreign Correspondent at The Sunday Times. She has since been awarded Foreign Correspondent of the Year five times as well as Europe's top war reporting prize, the Prix Bayeux and was recently given the prestigious Lifetime Achievement Award by the Society of Editors. She is the bestselling author of ten books including Farewell Kabul, The Africa House, and The Sewing Circles of Herat and co-wrote the international bestseller I am Malala with Malala Yousafzai and The Girl from Aleppo with Nujeen Mustafa. Her last book Our Bodies, Their Battlefields won the first Pilecki Institute award for war reporting and was shortlisted for Britain's top non-fiction award, the Baillie Gifford Prize, as well as the Orwell Prize and the New York Public Library Bernstein award. She is a Fellow of the Royal Geographical Society, an Honorary Fellow of University College Oxford and was made an OBE in 2013.