Made at Home: The Food I Cook for the People I Love (Hardcover) 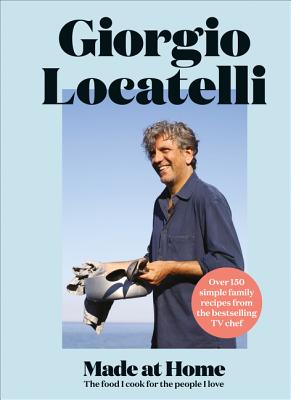 Made at Home: The Food I Cook for the People I Love (Hardcover)


Not On Our Shelves—Ships in 1-5 Days
Over 150 simple family recipes from the best-selling chef and judge on BBC's The Big Family Cooking Showdown.

From Tuscan tomato and bread soup to monkfish stew, simple spaghettis or lemon and pistachio polenta cake, Made at Home is a colourful collection of the food that Giorgio Locatelli loves to prepare for family and friends.

With recipes that reflect the places he calls home, from Northern Italy to North London or the holiday house he and his wife Plaxy have found in Puglia, Made at Home is a celebration of favourite vegetables combined in vibrant salads or fresh seasonal stews, along with generous fish and meat dishes and cakes to share. Early every evening, Giorgio's 'other family', the chefs and front of house staff at his restaurant, Locanda Locatelli, sit down together to eat, and Giorgio reveals the recipes for their best-loved meals, the Tuesday Pizza and the Saturday 'Italian' Burger.

In a series of features he also takes favourite ingredients or themes and develops them in four different ways, amid ideas for wholesome snacks, from mozzarella and ham calzoncini (pasties) to ricotta and swiss chard erbazzone (a traditional pie), crostini to put out with drinks, and fresh fruit ice creams and sorbets to round off a meal in true Italian style.

Michelin-starred Giorgio Locatelli is one of Britain's best known Italian chefs. Giorgio began his career at his family's restaurant in Italy before coming to London. He was head chef at Zafferano in London from its opening to a storm of praise and press coverage in 1994, before moving in 2002 to open Locanda Locatelli, where he remains chef-patron.