All That Glitters (Geek Girl #4) (Paperback) 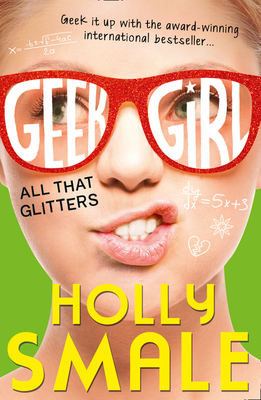 All That Glitters (Geek Girl #4) (Paperback)

This is book number 4 in the Geek Girl series.

"My name is Harriet Manners, and I have always been a geek."

The fourth book in the award-winning GEEK GIRL series.

She knows that toilet roll was invented by the Chinese in 600 AD.

She knows that a comet's tail always points away from the sun.

And she knows that the average healthy heart beats 70 times per minute. Even when it's broken.

But she knows nothing about making new friends at Sixth Form. Or why even her old friends seem to be avoiding her. And she knows even less about being a glittering supermodel success. Which she now is - apparently.

Has Harriet's time to shine like a star finally arrived, or is she about to crash and burn?

Holly Smale is the author of Geek Girl, Model Misfit and Picture Perfect. She was unexpectedly spotted by a top London modelling agency at the age of fifteen and spent the following two years falling over on catwalks, going bright red and breaking things she couldn't afford to replace. By the time Holly had graduated from Bristol University with a BA in English Literature and an MA in Shakespeare she had given up modelling and set herself on the path to becoming a writer.Geek Girl was the no. 1 bestselling young adult fiction title in the UK in 2013. It was shortlisted for several major awards including the Roald Dahl Funny Prize and the Branford Boase award, nominated for the Queen of Teen award and won the teen and young adult category of the Waterstones Children's Book Prize and the 11-14 category of the Leeds Book Award.