2022 Guide to the Night Sky: A Month-by-Month Guide to Exploring the Skies Above North America (Paperback) 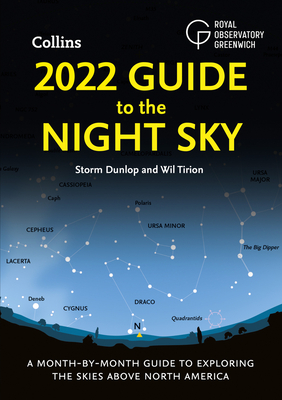 2022 Guide to the Night Sky: A Month-by-Month Guide to Exploring the Skies Above North America (Paperback)


Not On Our Shelves—Ships in 1-5 Days
This is the ideal resource for beginners and experienced stargazers in the United States and Canada, and has been updated to include new and practical information covering events occurring in North America's night sky throughout 2022. This practical guide is both an easy introduction to astronomy and a useful reference for seasoned stargazers. Now includes a section on comets and a map of the moon. Designed specifically for North America. Written and illustrated by astronomical experts, Storm Dunlop and Wil Tirion, and approved by the astronomers of the Royal Observatory Greenwich. Content includes: • Advice on where to start looking. • Easy-to-use star maps for each month with descriptions of what to see. • Positions of the moon and visible planets. • Details of objects and events in 2022. • Now in three editions: Britain and Ireland; North America; Southern Hemisphere.
Storm Dunlop is an experienced Astronomy and meteorology author and translator. Books include Clouds (Haynes, 2019), Gem Weather (Collins,2012), How to Read the Weather (National Trust, 2018), Meteorology Manual (Haynes, 2014), Practical Astronomy (Philip’s, 2012) and is the lead author for the bestselling annual Guide to the Night Sky (Collins).Fellow of the Royal Astronomical Society, the Royal Meteorological Society and a member of the International Astronomical Union. Wil Tirion was trained in graphic arts and has always had an interest in astronomy and especially star charts. In 1983 he became a self-employed full time Uranographer. Since then he has contributed to many atlases, books and magazines. In 1987 he received the ‘Dr. J. van der Bilt-prize’, a Dutch award for amateur astronomers. In 1993 this was followed by a second, more international "award," when a minor planet was named after him: (4648) Tirion = 1931 UE. The Royal Observatory, Greenwich is the home of Greenwich Mean Time and the Prime Meridian of the World, making it the official starting point for each new day and year. It is also home to London's only planetarium, the Harrison timekeepers and the UK's largest refracting telescope. It runs the annual Astronomy Photographer of the Year competition.