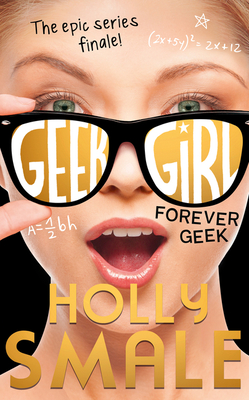 This is book number 6 in the Geek Girl series.

My name is Harriet Manners and I'll be a geek forever...

The FINAL book in the bestselling, award-winning GEEK GIRL series is here

Harriet Manners knows almost every fact there is.

Modelling isn't a sure-fire route to popularity. Neither is making endless lists.
The people you love don't expect you to transform into someone else.
Statistically you are more likely to not meet your Australian ex-boyfriend in Australia than bump into him there.

So on the trip of a lifetime Down Under Harriet's to-do lists are gone and it's Nat's time to shine Yet with nearly-not-quite-boyfriend Jasper back home, Harriet's completely unprepared to see supermodel ex Nick. Is the fashion world about to turn ugly for GEEK GIRL?

It's time for Harriet to face the future. Time to work out where her heart lies. To learn how to let go...

Holly Smale is the author of the award-winning, bestselling Geek Girl series. She was unexpectedly spotted by a top London modelling agency at the age of fifteen and spent the following two years falling over on catwalks, going bright red and breaking things she couldn't afford to replace. By the time Holly had graduated from Bristol University with a BA in English Literature and an MA in Shakespeare she had given up modelling and set herself on the path to becoming a writer.Geek Girl was the no. 1 bestselling young adult fiction title in the UK in 2013. It was shortlisted for several major awards including the Roald Dahl Funny Prize and the Branford Boase award, nominated for the Queen of Teen award and won the teen and young adult category of the Waterstones Children's Book Prize and the 11-14 category of the Leeds Book Award.The GEEK GIRL series has been translated in 28 languages worldwide.