My Brother Sam Is Dead (Hardcover) 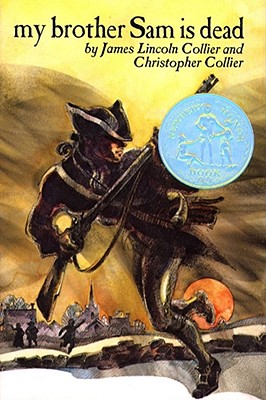 My Brother Sam Is Dead (Hardcover)


Not On Our Shelves—Ships in 1-5 Days
Winner of the Newbery Honor, the Revolutionary War comes alive in this contemporary classic for young adults.

The Revolutionary War had no clear-cut loyalties—it divided families, friends, and towns. Young Tim Meeker’s sixteen-year-old brother goes off to fight with the Patriots while his father remains a reluctant British Loyalist in the Tory town of Redding, Connecticut. Tim’s always looked up to his brother, who’s smart and brave. With the war soon raging, Tim knows he’ll have to make a choice—between the Revolutionaries and the Redcoats…and between his brother and his father. Over the course of the war, Tim learns that life teaches some bitter lessons and does not guarantee clear answers. My Brother Sam Is Dead is a stirring, probing tale full of action and suspense, putting you right into the heart of the Revolutionary War.
James Lincoln Collier is an American journalist, professional musician, and author of books, primarily nonfiction for adult readers and fiction for children. His literary works include My Brother Sam Is Dead, a Newbery Honor book that was also named an American Library Association Notable Children’s Book and was nominated for a National Book Award in 1975.

Christopher Collier is an American historian and fiction writer. Collier and his brother, author James Lincoln Collier, have cowritten novels, most of which are based on historic events. Their novel My Brother Sam Is Dead is a Newbery Honor book that was also named an American Library Association Notable Children’s Book and was nominated for a National Book Award in 1975.