Liars, Lovers, and Heroes: What the New Brain Science Reveals About How We Become Who We Are (Paperback) 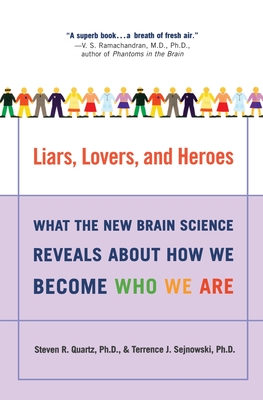 Liars, Lovers, and Heroes: What the New Brain Science Reveals About How We Become Who We Are (Paperback)

This book combines cutting-edge findings in neuroscience with examples from history and the headlines to introduce the new science of cultural biology, born of advances in brain imaging, computer modeling, and genetics. Doctors Quartz and Sejnowski show how both our noblest and darkest traits are rooted in brain systems so ancient that we share them with insects. They then demystify the dynamic engagement between brain and world that makes us something far beyond the sum of our parts.

The authors show how our humanity unfolds in precise stages as brain and world engage on increasingly complex levels. Their discussion embraces shaping forces as ancient as climate change over millennia and events as recent as the terrorism and heroism of September 11, and offers intriguing answers to some of our most enduring questions, including why we live together, love, kill -- and sometimes lay down our lives for others.

Steven R. Quartz, Ph.D., is director of the Social Cognitive Neuroscience Laboratory at the California Institute of Technology and an associate professor in the Division of Humanities and Social Sciences and the Computation and Neural Systems Program. He was a fellow of the Sloan Center for Theoretical Neurobiology at the Salk Institute and a recipient of the National Science Foundation's CAREER award, its most prestigious award for young faculty. He lives in Topanga, California.

Terrence J. Sejnowski, Ph.D., is regarded as the world's foremost theoretical brain scientist. His demonstration of NETtalk, a neural network that learned to read English words, helped spark the 1980s neural network revolution for which he received the IEEE Neural Network Pioneer Award in 2002. He received his Ph.D. in physics from Princeton University before studying neurobiology at Harvard University School of Medicine. He is an investigator with the Howard Hughes Medical Institute and directs the Computational Neurobiology Laboratory at the Salk Institute. At the University of California at San Diego he is a professor of biology, physics, and neurosciences and directs the Institute for Neural Computation. He has published more than two hundred scientific articles and has been featured in the national media. He lives in Solana Beach, California.

“An evocative solution to a classic problem: which is more important in shaping the human brain, nature or nurture? ” — Sandra Blakeslee, The New York Times

“Smart authors with a lot of hot stuff to report on.” — Kirkus Reviews

“An entertaining and startling survey of what it means to be human.” — Discover magazine