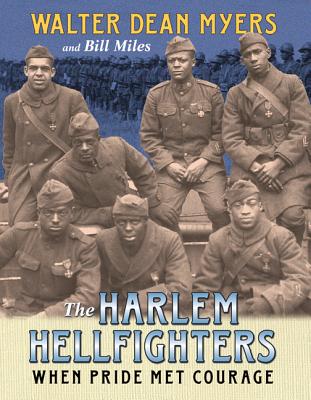 "We cannot let this history die, nor can we let it fade away. As it has filled me with pride and given me understanding of one group of outstanding soldiers, so it should be passed on to all Americans to appreciate and honor" (from the introduction by coauthor and unit historian Bill Miles)

A good choice for book reports and other research by middle grade students—as well as for parents and teachers to share with young people interested in World War II and African American history.

At a time of widespread bigotry and racism, the African American soldiers of the 369th Infantry Regiment put their lives on the line in the name of democracy.

Bill Miles wrote: "The 369th was not only an outstanding military unit; it also represented a part of the history of my Harlem community and, as such, part of my history as well. As I learned the story of the regiment—how it was first formed, its glorious record in World War I—I knew I was discovering a hidden history of African American accomplishments."

He continued: "As unit historian I recognize that the documentation of the 369th is as vital to understanding the African American experience as any story about slavery or the civil rights movement. For in the story of the 369th—in the trenches of France, in the battles of Meuse-Argonne, and at the bloody siege of Sechault—we have African Americans defining their own characters with courage and determination, writing their own history in sweat and blood."

Oscar nominee Bill Miles produced and directed numerous award-winning documentaries dedicated to African American history and achievement, including I Remember Harlem and The Different Drummer: Blacks in the Military. He was named the official historian of the 369th Regiment Armory in Harlem.