In the Land of Words: New and Selected Poems (Hardcover) 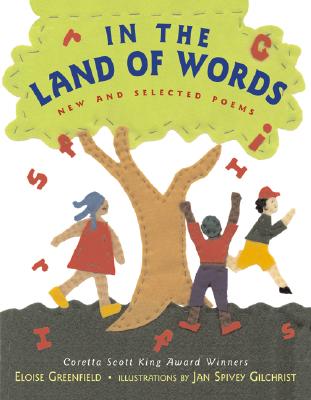 In the Land of Words: New and Selected Poems (Hardcover)

Featuring twenty-one poems illustrated with sewn fabric collages, this tribute to the written word invites readers to look within themselves to discover what inspires them.

Eloise Greenfield, winner of the National Council of Teachers of English Excellence in Poetry for Children Award, says: The words can come from a memory, or a dream, or something I see or hear or wonder about or imagine. . . . Maybe there's a place where words live, where our minds and hearts can go and find them when we want to write or read. I like to imagine that there is such a place. I call it "The Land of Words."

Includes an author's note, a table of contents, sources, and an index.

Eloise Greenfield’s first book was published in 1972. She was the author of forty-eight children’s books including Honey, I Love and Other Poems and The Great Migration. She received many awards, including the 2018 Coretta Scott King - Virginia Hamilton Award for Lifetime Achievement. Eloise was a beloved children’s book creator whose pioneering voice, especially for the Black American experience, has made her an inspiration to many generations of readers.

Jan Spivey Gilchrist is the award-winning illustrator-author of seventy-four children's books. Dr. Gilchrist illustrated the highly acclaimed picture book The Great Migration: Journey to the North, winner of the Coretta Scott King Honor Award, a Junior Library Guild Best Book, an NAACP Image Award nominee, a CCBC Best Book, and a Georgia State Children's Book Award nominee. She won the Coretta Scott King Award for her illustrations in Nathaniel Talking and a Coretta Scott King Honor for her illustrations in Night on Neighborhood Street, all written by Eloise Greenfield. She was inducted into the Society of Illustrators in 2001 and into the International Literary Hall of Fame for Writers of African Descent in 1999. She lives near Chicago, Illinois.

“[a] joy-filled, right-on tribute to wordsmithing in all its forms." — Kirkus Reviews

“... the very simple rhythmic rhymes show and tell the joy of words, their meaning, and also their glorious-sounding nonsense... Gilchrist, who has illustrated several books by Greenfield, here uses sewn fabric collages for the first time, and it works beautifully, with elemental shapes, colors, and movement that capture the rhythm and still leave lots of space for the words to do their magic. A great read-aloud for toddlers as well as older preschoolers.” — Booklist