Autobiography of My Dead Brother (Paperback) 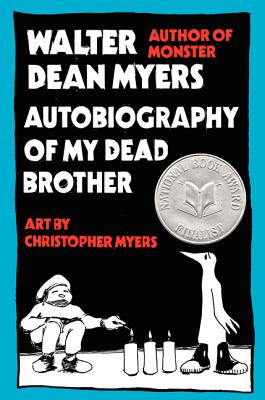 Autobiography of My Dead Brother (Paperback)

A powerful National Book Award Finalist from the acclaimed, bestselling author of Monster. "This novel is like photorealism; it paints a vivid and genuine portrait of life that will have a palpable effect on its readers." (School Library Journal starred review)

With Harlem as its backdrop, Autobiography of My Dead Brother follows the diverging paths of best friends Rise and Jesse. When Rise becomes engulfed in gang activity and starts dealing drugs, Jesse, a budding artist, tries to make sense of the complexities of friendship, loyalty, and loss in a neighborhood plagued by drive-by shootings, vicious gangs, and an indifferent juvenile justice system.

The innovative first-person storytelling, along with cartoons and photos, pulls in readers and makes Autobiography of My Dead Brother a strong and thought-provoking choice for sharing in a classroom or at home.

"Though the story is starkly realistic, there is always hope in the gifts of Jesse the artist and C. J. the musician, of schools and churches and of caring parents." (Kirkus)

Christopher Myers is a graduate of Brown University and the Whitney Museum of Art Independent Studio Program. He is the acclaimed illustrator of Love: Selected Poems by E. E. Cummings; Harlem: A Poem, a Caldecott Honor Book; Jazz, a Coretta Scott King Honor Book; Blues Journey, a Boston Globe-Horn Book Honor Book. He is also the author-illustrator of Black Cat and H.O.R.S.E.: A Game of Basketball and Imagination, both Coretta Scott King Illustrator Honor Books; We Are America: A Tribute from the Heart; A Time to Love: Stories from the Old Testament; Looking Like Me; Wings; and Fly!

“Paints a vivid and genuine portrait of life that will have a palpable effect on its readers.” — School Library Journal (starred review)

“Striking black–and–white illustrations.. What will affect readers most is Jessie’s sharp, sometimes poetic first–person voice and the spirited, rhythmic dialogue of other vivid characters.” — Booklist

“Teens, some who may be struggling with similar issues, will be on edge while 15-year-old Jesse decides if he will allow his environment and peers to dictate the type of man he will become.” — KLIATT