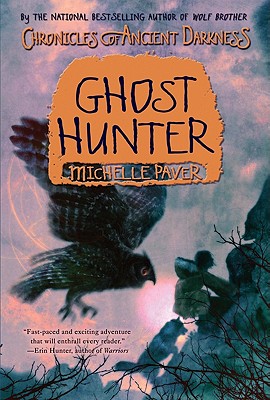 This is book number 6 in the Chronicles of Ancient Darkness series.

In the conclusion of Michelle Paver’s bestselling Chronicles of Ancient Darkness series, the ultimate battle between good and evil is waged. A thrilling read for fans of Brandon Mull and Jeanne DuPrau.

Winter is coming. Souls' Night draws near. Eostra the Eagle Owl Mage holds the clans in the grip of terror. Torak must leave the Forest and seek her lair in the Mountain of Ghosts, while Renn faces an agonizing decision. Wolf, their faithful pack-brother, must overcome wrenching grief.

And in the final fight against the forces of darkness, Torak will make the most shattering choice of all.

Ghost Hunter draws you for the last time into the shadowy world of the deep past, and brings Torak to the end of his incredible journey.