A Troubled Peace (Under A War-Torn Sky #2) (Paperback) 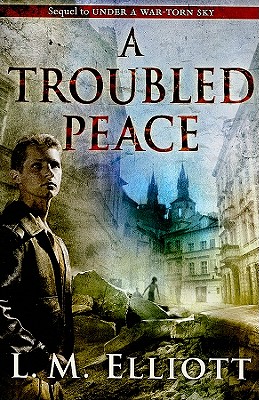 A Troubled Peace (Under A War-Torn Sky #2) (Paperback)

World War II may be ending, but the conflict still rages for nineteen-year-old bomber pilot Henry Forester. After returning home to Virginia he is still reliving his struggles, and can’t stop worrying about the safety of those who helped him escape—most of all, one French boy, Pierre, who may have lost everything because of Henry. When he returns to France to find Pierre, Henry is staggered by the consequences of war. Amid starvation, cities devastated by Allied bombing, and the shocking return of concentration camp survivors, Henry must embark on a brave search for a lost boy and a fight to find his own peace.

L. M. Elliott is the New York Times bestselling author of Da Vinci’s Tiger; Under a War-Torn Sky; A Troubled Peace; Across a War-Tossed Sea; Annie, Between the States; Give Me Liberty; Flying South; and Hamilton and Peggy! She lives in Virginia with her family. You can visit her online at www.lmelliott.com.