Korea: A Walk Through the Land of Miracles (Paperback) 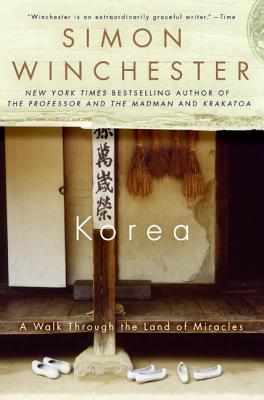 Korea: A Walk Through the Land of Miracles (Paperback)

In the late 1980s, New York Times bestselling author Simon Winchester set out on foot to discover the Republic of Korea - from its southern tip to the North Korean border - in order to set the record straight about this enigmatic and elusive land.

Fascinating for its vivid presentation of historical and geographic detail, Korea is that rare book that actually defines a nation and its people. Winchester's gift for capturing engaging characters in true, compelling stories provides us with a treasury of enchanting and informed insight on the culture, language, history, and politics of this little-known corner of Asia.

With a new introduction by the author, Korea is a beautiful journey through a mysterious country and a memorable addition to the many adventures of Simon Winchester.

Simon Winchester is the acclaimed author of many books, including The Professor and the Madman, The Men Who United the States, The Map That Changed the World, The Man Who Loved China, A Crack in the Edge of the World, and Krakatoa, all of which were New York Times bestsellers and appeared on numerous best and notable lists. In 2006, Winchester was made an officer of the Order of the British Empire (OBE) by Her Majesty the Queen. He resides in western Massachusetts.