The Boys of Summer (Paperback) 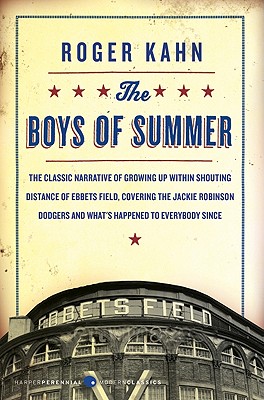 The Boys of Summer (Paperback)

The classic narrative of growing up within shouting distance of Ebbets Field, covering the Jackie Robinson Dodgers, and what’s happened to everybody since.

This is a book about young men who learned to play baseball during the 1930s and 1940s, and then went on to play for one of the most exciting major-league ball clubs ever fielded, the team that broke the color barrier with Jackie Robinson. It is a book by and about a sportswriter who grew up near Ebbets Field, and who had the good fortune in the 1950s to cover the Dodgers for The Herald Tribune. This is a book about what happened to Jackie, Carl Erskine, Pee Wee Reese, and the others when their glory days were behind them. In short, it is a book about America, about fathers and sons, prejudice and courage, triumph and disaster, and told with warmth, humor, wit, candor, and love.

Roger Kahn, a prize-winning author, grew up in Brooklyn, where he says everybody on the boys' varsity baseball team at his prep school wanted to play for the Dodgers. None did. He has written nineteen books. Like most natives of Brooklyn, he is distressed that the Dodgers left. "In a perfect world," he says, "the Dodgers would have stayed in Brooklyn and Los Angeles would have gotten the Mets."

"A work of high purpose and poetic accomplishment. The finest American book on sports." — James Michener