Couscous and Other Good Food from Morocco (Paperback) 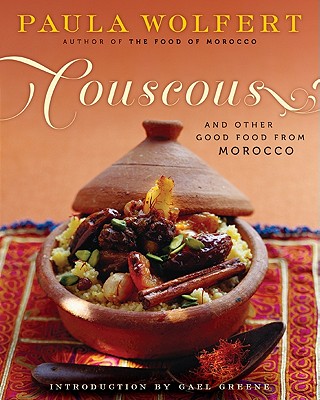 Couscous and Other Good Food from Morocco (Paperback)

One of the world's great cuisines lovingly and meticulously presented by an outstanding authority on food. Reveals the variety and flavor of the country itself.

"The Paula Wolfert I know is an adventuress, a sensualist, a perfectionist cook, a highwire kitchen improvizationalist. And this book is the story of her love affair with Morocco." -Gael Green

North Africa is the home to one of the world's great cuisines. Redolent of saffron, cumin and cilantro, Moroccan cooking can be as elegant or as down-home hearty as you want it to be. In Couscous and Other Good Food from Morocco, author Paula Wolfert has collected delectable recipes that embody the essence of the cuisine.

From Morocco's national dish, couscous (for which Wolfert includes more than 20 different recipes), to delicacies such as Bisteeya (a pigeon pie made with filo, eggs, and raisins among other ingredients), Wolfert describes both the background of each recipe and the best way to prepare it. As if the mouthwatering recipes weren't enough, each chapter includes some aspect of Moroccan culture or history, be it an account of Moroccan moussems, or festivals, or a description of souks, or markets. Just reading the recipes will be enough to induce ravenous hunger even on a full stomach.

Once you've tried the Chicken Tagine with Prunes and Almonds, or the Seared Lamb Kebabs Cooked in Butter, Paula Wolfert's Couscous and Other Good Foods from Morocco will become a well-worn title on your cookbook shelf.

Paula Wolfert is an expert on Mediterranean food and the author of nine cookbooks, including The Food of Morocco, Mediterranean Clay Pot Cooking, The Slow Mediterranean Kitchen, and The Cooking of Southwest France. Wolfert has won the James Beard Award, the Julia Child Award, the M. F. K. Fisher Award, and the Tastemaker Award, and was a finalist for the André Simon Award. A regular columnist for Food & Wine, Wolfert lives in Sonoma, California.