The Queen's Slave Trader: John Hawkyns, Elizabeth I, and the Trafficking in Human Souls (Paperback) 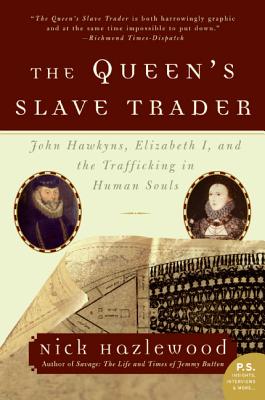 The Queen's Slave Trader: John Hawkyns, Elizabeth I, and the Trafficking in Human Souls (Paperback)

Throughout history, blame for the introduction of slavery in America has been squarely placed upon the slave traders who ravaged African villages, the merchants who auctioned off human lives as if they were cattle, and the slave owners who ruthlessly beat their helpless victims. There is, however, above all these men, another person who has seemingly been able to avoid the blame due her. The origins of slavery -- often described as America's shame -- can actually be traced back to a woman, England's Queen Elizabeth I.

During the 1560s, Elizabeth was encouraging a Renaissance in her kingdom but also knew her country's economy could not finance her dreams for it. On direct orders from Her Majesty, John Hawkyns set sail from England. His destination: West Africa. His mission: to capture human lives.

After landing on the African coast, he used a series of brutal raids, violent beatings, and sheer terror to load his ships. As the first major slave trader, Hawkyns's actions and attitudes toward his cargo set the precedent for those who followed him for the next two hundred years. In The Queen's Slave Trader, historian Nick Hazlewood's haunting discoveries take you into the mind-set of the men who made their livelihoods trafficking human souls and at long last reveals the man who began it all -- and the woman behind him.

Nick Hazlewood has a degree in history and, in 1994, left his job with the trade union UNISON to travel throughout South and Central America. He is a freelance journalist and writer and lives in Madrid.

“A gripping tale and a sterling analysis of England’s first foray into the nastiest of human enterprises.” — Kirkus Reviews

“Hazlewood writes with precision, passion and the ease born of familiarity with his subject.” — Cleveland Plain Dealer