Empires of the Word: A Language History of the World (Paperback) 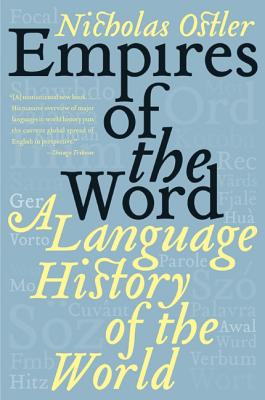 Empires of the Word: A Language History of the World (Paperback)

Nicholas Ostler's Empires of the Word is the first history of the world's great tongues, gloriously celebrating the wonder of words that binds communities together and makes possible both the living of a common history and the telling of it. From the uncanny resilience of Chinese through twenty centuries of invasions to the engaging self-regard of Greek and to the struggles that gave birth to the languages of modern Europe, these epic achievements and more are brilliantly explored, as are the fascinating failures of once "universal" languages. A splendid, authoritative, and remarkable work, it demonstrates how the language history of the world eloquently reveals the real character of our planet's diverse peoples and prepares us for a linguistic future full of surprises.

A scholar with a working knowledge of twenty-six languages, Nicholas Ostler has degrees from Oxford University in Greek, Latin, philosophy, and economics, and a Ph.D. in linguistics from MIT, where he studied under Noam Chomsky. He lives in Bath, England.

“What an extraordinary odyssey the author of this superb work embarked upon.” — Literary Review

“Revolutionary... Executed with a giddying depth of scholarship, yet the detail is never too thick to swamp the general reader.” — Boston magazine

“A story of dramatic reversals and puzzling paradoxes. A rich... text with many piercing observations and startling comparisons.” — Los Angeles Times Book Review