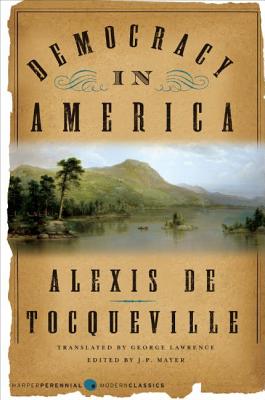 Originally penned in the mid-eighteenth century by Frenchman Alexis de Tocqueville, Democracy in America remains one of the most penetrating and astute picture of American life, politics, and morals ever written, as relevant today as when it first appeared in print nearly two hundred years ago.

This edition, based on the revised and corrected text of the 1961 French edition and meticulously edited by the distinguished de Tocqueville scholar J. P. Mayer, is widely recognized as the preeminent translation.

Alexis de Tocqueville (1805-1859) was born in Verneuil, France. A historian and political scientist, he came to the United States in 1831 to report on the prison system. His experiences would later become the basis for his classic study Democracy in America.

“De Tocqueville, whose brilliance has always been granted by academics, is now accessible to readers who don’t mind brilliance as long as it is readable.” — San Francisco Chronicle

“[George Lawrence’s] wonderful style has given us a work that will be a standard for many years.” — Library Joural

“Among the most remarkable productions of our time.” — John Stuart Mill