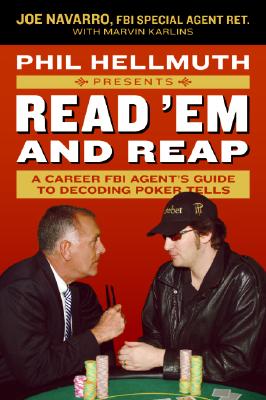 very great player knows that success in poker is part luck, part math, and part subterfuge. While the math of poker has been refined over the past 20 years, the ability to read other players and keep your own "tells" in check has mostly been learned by trial and error.

But now, Joe Navarro, a former FBI counterintelligence officer specializing in nonverbal communication and behavior analysis—or, to put it simply, a man who can tell when someone's lying—offers foolproof techniques, illustrated with amazing examples from poker pro Phil Hellmuth, that will help you decode and interpret your opponents' body language and other silent tip-offs while concealing your own. You'll become a human lie detector, ready to call every bluff—and the most feared player in the room.

FBI Special Agent (Ret.) JOE NAVARRO worked for the Bureau in counterintelligence and counterterrorism. He is now a lecturer and consultant for major companies worldwide. He is the author of What Every BODY is Saying, and has appeared on Hardball with Chris Matthews, the Today Show, the CBS Early Show, CNN, Fox News, and other major media. He lives in Tampa, Florida.

Marvin Karlins received his Ph.D. in psychology from Princeton University and is senior professor of management at the University of South Florida. He is the author of twenty-three books and most recently collaborated with Joe Navarro on Phil Hellmuth Presents Read 'Em and Reap.

Phil Hellmuth, Jr. is a ten-time World Series of Poker Champion and all-time leading money winner at the World Series of Poker. In addition to appearances on the Discovery Channel, E!, ESPN, and Fox Sports Net, he has been featured in Sports Illustrated, Time, and Esquire. Phil also contributes to Gambling Times Magazine and writes for many poker websites. He lives with his family in Palo Alto, California.