From Harvey River: A Memoir of My Mother and Her Island (Paperback) 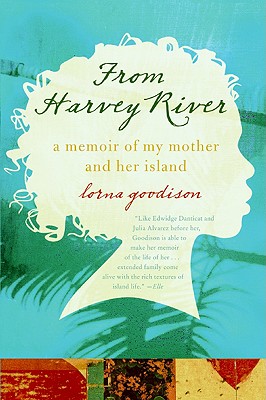 From Harvey River: A Memoir of My Mother and Her Island (Paperback)

When Doris Harvey's English grandfather, William Harvey, discovers a clearing at the end of a path cut by the feet of those running from slavery, he gives his name to what will become his family's home for generations. For Doris, Harvey River is the place she always called home, the place where she was one of the "fabulous Harvey girls," and where the rich local bounty of Lucea yams, pimentos, and mangoes went hand in hand with the Victorian niceties of her parents' house. It is a place she will return to in dreams when her fortunes change, years later, and she and her husband, Marcus Goodison, relocate to "hard life" Kingston and encounter the harsh realities of urban living in close quarters.

In Lorna Goodison's luminous memoir of her forebears, we meet a cast of wonderfully drawn characters, including George O'Brian Wilson, the Irish patriarch of the family who marries a Guinea woman after coming to Jamaica in the mid-1800s; Doris's parents, Margaret and David, childhood sweethearts who become the first family of Harvey River; and Margaret and David's eight children.

In lush, vivid prose, textured with the cadences of Creole speech, Lorna Goodison weaves together memory and mythology to create a vivid tapestry. She takes us deep into the heart of a complete world to tell a universal story of family and the ties that bind us to the place we call home.

Lorna Goodison is an internationally recognized poet who has published eight books of poetry and two collections of short stories. In 1999 she received the Musgrave Gold Medal from Jamaica, and her work has been widely translated and anthologized in major collections of contemporary poetry. Born in Jamaica, Goodison now teaches at the University of Michigan. She divides her time between Ann Arbor and Toronto.

“Being introduced to the cast of ‘From Harvey River’ is like sitting down at the family dining table. You’ll stay for the day then on into the evening as each new character pulls up a chair. You could not be in better company.” — New York Times Book Review

“Goodison’s memoir reaches back over generations to evoke the mythic power of childhood, the magnetic tug of home, and the friction between desire and duty that gives life its unexpected jolts.” — Publishers Weekly (starred review)