The Garden of Truth: The Vision and Promise of Sufism, Islam's Mystical Tradition (Paperback) 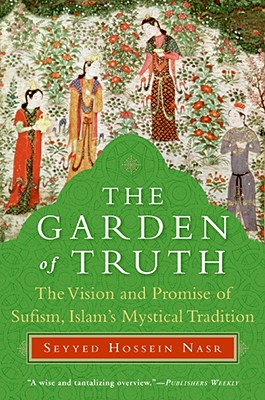 The Garden of Truth: The Vision and Promise of Sufism, Islam's Mystical Tradition (Paperback)

The headlines are filled with the politics of Islam, but there is another side to the world's fastest-growing religion. Sufism is the poetry and mysticism of Islam. This mystical movement from the early ninth century rejects worship motivated by the desire for heavenly reward or the fear of punishment, insisting rather on the love of God as the only valid form of adoration. Sufism has made significant contributions to Islamic civilization in music and philosophy, dance and literature. The Sufi poet Rumi is the bestselling poet in America. But in recent centuries Sufism has been a target for some extremist Islamic movements as well as many modernists. The Garden of Truth presents the beliefs and vision of the mystical heart of Islam, along with a history of Sufi saints and schools of thought.

In a world threatened by religious wars, depleting natural resources, a crumbling ecosystem, and alienation and isolation, what has happened to our humanity? Who are we and what are we doing here? The Sufi path offers a journey toward truth, to a knowledge that transcends our mundane concerns, selfish desires, and fears. In Sufism we find a wisdom that brings peace and a relationship with God that nurtures the best in us and in others.

Noted scholar Seyyed Hossein Nasr helps you learn the secret wisdom tradition of Islam and enter what the ancient mystics call the "garden of truth." Here, liberate your mind, experience peace, discover your purpose, fall in love with the Divine, and find your true, best self.

Seyyed Hossein Nasr is university professor of Islamic Studies at George Washington University. Author of over fifty books, Professor Nasr is a well-known and highly respected intellectual figure both in the West and in the Islamic world. Born in Tehran, raised from the age of twelve in the United States, and a graduate of MIT and Harvard University, Nasr is well qualified to explain Islam to a Western audience. He appears frequently on Meet the Press, as well as other national news shows.

“Despite the popularity of Sufism, few books provide an overview of this mystical branch of Islam— a void Nasr fills nicely with this concise primer. . . . a wise and tantalizing overview.” — Publishers Weekly

The Sufi mystical heart of Islam is one of the few antidotes to fundamentalism in the Muslim world, and here Nasr looks at the human spiritual quest for the paradisiacal divine garden from a Sufi perspective . . . Eloquent, elegant, and lucid. — Library Journal