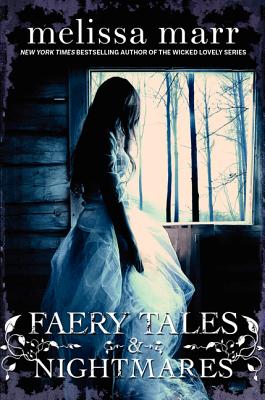 Faery Tales & Nightmares is an anthology of short stories by Melissa Marr, many set in the world of her Wicked Lovely series.

Marr revisits favorite fan characters such as faeries Niall and Irial, and introduces fascinating new beings, including a vampire, a pair of selchie brothers, and a goblin. The strange creatures can appear anywhere, coming from the sea, from the woods, from inside storms; they may come seeking to bring destruction or to find a passionate encounter…

Lush, seductive, and chilling, the stories in Melissa Marr’s Faery Tales & Nightmares blend fairy tales and folklore, horror and fantasy, and allow us to revel in the unseen magic that infuses the world as we know it.

Melissa Marr is the New York Times bestselling author of the Wicked Lovely series as well as the adult fantasy novels Graveminder and The Arrivals. When not traveling, Melissa can be found in Phoenix or online at www.melissamarrbooks.com.

Simple but lyrical language, resourceful female protagonists, and a mixed bag of supernatural delights should hold an allure for fans and newcomers alike.
— Publishers Weekly