Die for Me (Paperback) 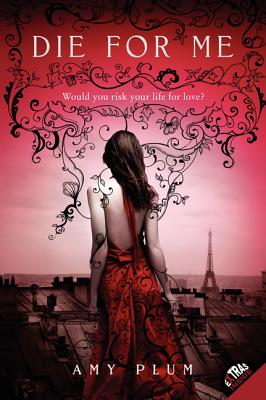 Die for Me (Paperback)

This is book number 1 in the Die for Me series.

“Devasted after the death of her parents, Katie Mercier moves to her grandparents' home in Paris. Sitting at a cafe, she is drawn to the handsome Vincent. As their relationship grows, Katie's heart starts to mend. But the secret of Vincent's terrifying destiny could leave Katie more heartbroken than before. Is true love worth it? Die For Me is a brilliant debut novel that is rich with romance, mystery and paranormal mythology.”
— Karin Beyer, Saturn Booksellers, Gaylord, MI

Die for Me is the first in an internationally bestselling paranormal romance series by Amy Plum. This thoroughly original young adult novel caused Booklist to proclaim, "Move over, Bella and Edward."

When Kate Mercier's parents die in a tragic car accident, she has to leave everything behind and move to Paris to live with her grandparents. Kate knows her life will never be the same. But she has no idea how right she is…until she meets Vincent. Mysterious, sexy, and unnervingly charming, Vincent Delacroix puts Kate in danger of losing her heart all over again. Especially when Kate discovers his impossible secret: Vincent is no normal human. He has a terrifying destiny and enemies who are determined to destroy him and all of his kind. And Kate soon realizes that if she follows her heart, she may never be safe again.

Die for Me is the first book in a trilogy rich with atmosphere and thrills. Readers will no doubt agree with New York Times bestselling author Aprilynne Pike, who said, "I devoured this lush, mysterious romance, which delivers a refreshingly human heroine alongside a hero truly deserving of the title."

This paperback edition has extras inside. Discover some of Kate's favorite things; enjoy a sneak peek at Until I Die, the sequel to Die for Me; and more!

Amy Plum is the international bestselling author of the Dreamfall series, the Die for Me series, and the After the End series. She spent her childhood in Birmingham, Alabama, her twenties in Chicago and Paris, and several more years in London, New York, and the Loire Valley. Now she lives in Paris and swears she’ll never move again. You can visit Amy online at www.amyplumbooks.com.

“I devoured this lush, mysterious romance, which delivers a refreshingly human heroine alongside a hero truly deserving of the title.” — Aprilynne Pike, #1 New York Times bestselling author of the Wings series

“Action and drama abound. Plum has done an excellent job of setting up the rules for her creations and following them closely. Fans of this genre will have their appetites reignited by this new addition.” — School Library Journal (starred review)

“Move over, Bella and Edward. Plum introduces a world and a story that are sure to intrigue teen readers and will easily attract fans of the Twilight series.” — Booklist

“Plum’s debut is the perfect combo of romance and thrills, with heart-pumping action that will make you jump and love that will make you cry out for joy. You’ll hang on every word, reading late into the night, waiting to find out what’s next.” — Romantic Times