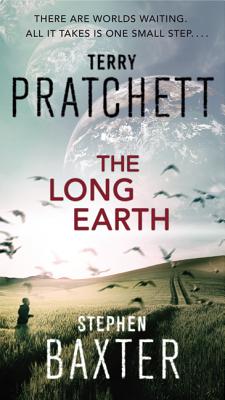 This is book number 1 in the Long Earth series.

An unmissable milestone for fans of Sir Terry Pratchett: the first SF novel in over three decades in which the visionary inventor of Discworld has created a new universe of tantalizing possibilities—a series of parallel “Earths” with doorways leading to adventure, intrigue, excitement, and an escape into the furthest reaches of the imagination.

The Long Earth is an adventure of the highest order—and an unforgettable read.

Sir Terry Pratchett was the internationally bestselling author of more than thirty books, including his phenomenally successful Discworld series. His young adult novel, The Amazing Maurice and His Educated Rodents, won the Carnegie Medal, and Where's My Cow?, his Discworld book for “readers of all ages,” was a New York Times bestseller. His novels have sold more than seventy five million (give or take a few million) copies worldwide. Named an Officer of the British Empire “for services to literature,” Pratchett lived in England. He died in 2015 at the age of sixty-six.

Stephen Baxter is an acclaimed, multiple-award-winning author whose many books include the Xeelee Sequence series, the Time Odyssey trilogy (written with Arthur C. Clarke), and The Time Ships, a sequel to H. G. Wells's classic The Time Machine. He lives in England.

“Stay tuned for the next episode of a very old-fashioned sf quest yarn (think Jules Verne and 2001) that, since Pratchett is involved, is crammed with scientifically informed amusement.” — Booklist

“In this thought-provoking collaboration, Pratchett (the Discworld series) and Baxter (Stone Spring) create an infinity of worlds to explore… fascinating premise…” — Publishers Weekly

“The Long Earth is a brilliant Science Fiction collaboration with Stephen Baxter: a love letter to all Pratchett fans, readers, and lovers of wonder everywhere… This novel is a gift to be shared with anyone who loves to be amazed.” — Io9

“The writing is elegant and witty...The worlds of the Long Earth are all richly rendered, and even the walk-on characters are deftly imagined…and the potential seems endless not just for the characters, but for Pratchett and Baxter as well.” — Tor.com

“ The Long Earth is the solid start of a series with infinite potential.” — Shelf Awareness