LudoBites: Recipes and Stories from the Pop-Up Restaurants of Ludo Lefebvre (Paperback) 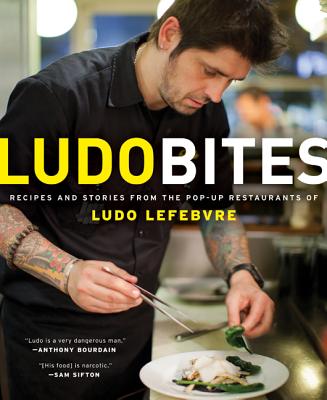 LudoBites: Recipes and Stories from the Pop-Up Restaurants of Ludo Lefebvre (Paperback)


Special Order—Subject to Availability
Visionary, charismatic master chef, Ludo Lefebvre, and his Los Angeles cult hit “pop-up” restaurant LudoBites are worshipped by critics and foodies alike. LudoBites, the book, is at once a chronicle and a cookbook, containing tales of the meteoric career of this “rock star” of the culinary world (who was running kitchens at age 24) and the full story of his brilliant innovation, the “pop up” or “touring” restaurant that moves from place to place. The star of the popular cable program, Ludo Bites America, on the Sundance Channel, also offers phenomenal four-star recipes born out of the need to be mobile. Readers who love food, who admire genius, and fans of TV’s Top Chef, Top Chef Masters, and Iron Chef are going to want a taste of LudoBites.

Ludovic Lefebvre trained with chef Pierre Gagnaire, and at restaurants L'Espérance with Marc Meneau, L'Arpége with Alain Passard, and Le Grande Véfour with Guy Martin in France. Then he moved to Los Angeles to work at L'Orangerie, where he became head chef at twenty-five. Under his guidance, L'Orangerie became one of the top-rated restaurants in California, receiving the Mobil five-star rating. Lefebvre then moved on to Bastide, where he also received the prestigious Mobil five-star rating.

In 2007 he started a guerrilla-style pop-up restaurant event called LudoBites that currently takes place at different locations around Los Angeles. Named by Relais & Chateaux as one of the World's 50 Greatest Chefs, Lefebvre was also a 2001 nominee for the James Beard Foundation Rising Chef Award, and is the author of the cookbook Crave. Lefebvre lives in Los Angeles with his wife and partner, Krissy, and their children.