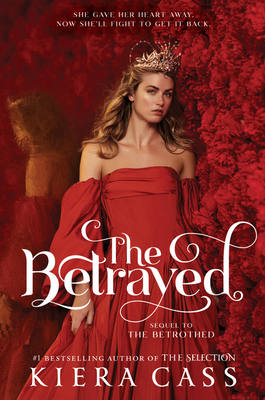 Kiera Cass brings another sparkling romance to a stunning conclusion in this sequel to the instant #1 New York Times bestseller The Betrothed.

Can you follow your heart when it’s already broken?

After fleeing Coroa and leaving the memory of her beloved Silas behind, Hollis is unsteadily adjusting to life in Isolte. The Eastoffe family’s affection is a balm on her weary spirit, though Etan, a surly cousin with a deep distaste for Coroans, threatens to upset the uneasy peace she’s found.

While tensions at home ratchet up, disquiet in the kingdom of Isolte is reaching a fever pitch. The Eastoffes may have the power to unseat a tyrannical king—but only with Hollis’s help.

Can a girl who’s lost it all put the fate of her adopted homeland over the secret longings of her heart?

Kiera Cass is the #1 New York Times bestselling author of the Selection series and The Siren. She is a wife and mom and too many other things to list. If she could make a crown out of anything, it would be the unending tears of her readers. You can learn more about Kiera and her books at www.kieracass.com.

PRAISE FOR THE BETROTHED: "Fans of The Selection series will anxiously await the second installment of this duology to learn Hollis’s fate."

PRAISE FOR KIERA CASS: “A real page-turner. Romance, royalty, and revolution in a reality-show format serve Cass’ boldly rendered heroine well in her quest for justice and love.”
— ALA Booklist

“America has the right mix of sass and heart, and her over-the-top royal treatment is enough to make any reader who has ever played dress-up envious. Cass wisely keeps readers on the edge of their seats to find out who Maxon will finally choose as his bride.”
— Publishers Weekly

“An engrossing tale reminiscent of Shannon Hale’s Princess Academy and Ally Condie’s Matched. Fairy-tale lovers will lose themselves in America’s alternate reality and wish that the next glamorous sequel were waiting for them.”
— School Library Journal

“Cass’s immensely readable debut novel is a less drastic Hunger Games, with elaborate fashion and trappings. The fast-paced action will have readers gasping for the upcoming sequel.”
— ALA Booklist