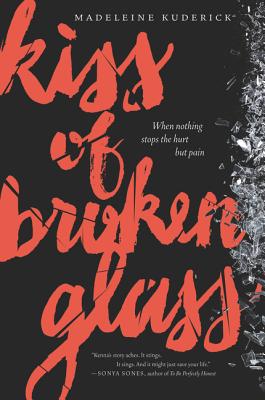 Madeleine Kuderick’s gripping debut is a darkly beautiful and lyrical novel in verse, perfect for fans of Sonya Sones and Laurie Halse Anderson. Kiss of Broken Glass pulses with emotion and lingers long after the last page.

In the next seventy-two hours, Kenna may lose everything—her friends, her freedom, and maybe even herself. One kiss of the blade was all it took to get her sent to the psych ward for seventy-two hours. There she will face her addiction to cutting, though the outcome is far from certain.

When fifteen-year-old Kenna is found cutting herself in the school bathroom, she is sent to a facility for mandatory psychiatric watch. There, Kenna meets other kids like her—her roommate, Donya, who’s there for her fifth time; the birdlike Skylar; and Jag, a boy cute enough to make her forget her problems . . . for a moment.

Madeleine Kuderick writes for anthologies and magazines and has spoken at conferences, including the International Reading Association's, where she's an advocate for reluctant readers and the teachers who touch their lives. She has a bachelor's degree from the University of South Florida and an MBA from Saint Leo University.

Madeleine grew up in Oak Park, Illinois, a community with a rich literary tradition, where she was editor in chief of the same high school newspaper that Ernest Hemingway wrote for as a teen. She now lives on Florida's Gulf Coast with her husband and two children.