Vitamin K2 and the Calcium Paradox: How a Little-Known Vitamin Could Save Your Life (Paperback) 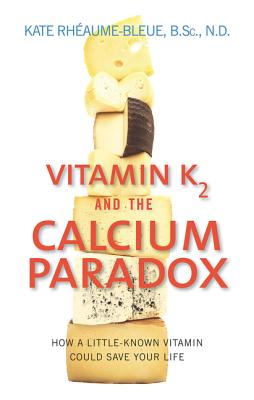 Vitamin K2 and the Calcium Paradox: How a Little-Known Vitamin Could Save Your Life (Paperback)

Dr Kate Rheaume-Bleue is a licensed Doctor of Naturopathic Medicine. She obtained her undergraduate degree in Biology from McMaster University, with an honors thesis that involved designing a clinical trial to evaluate natural medicine. Kate completed her professional training at the Canadian College of Naturopathic Medicine (class of '02), where she also pursued two additional years of residency training. As a member of both the Academic and Clinic faculties at CCNM for three years, Kate was a guest lecturer and teaching assistant for several courses. She was the supervising clinician at two different naturopathic public health clinics in Toronto and has held private practices in Toronto and Hamilton. Since 2006 Kate has been employed as an educator and spokesperson for Natural Factors Nutritional Products, Canada's largest manufacturer of nutritional supplements. She is also bilingual, lecturing in both official languages.