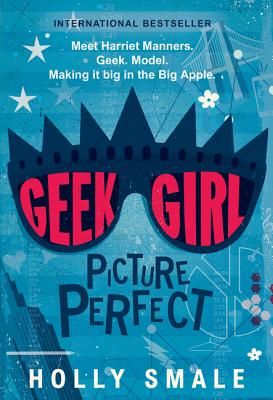 This is book number 3 in the Geek Girl series.

Geek Girl is coming to America! The internationally bestselling series takes on the Big Apple in this third hilarious, high-fashion adventure.

When Harriet’s dad gets a job in New York City, Harriet is beyond excited to move to the land of skyscrapers, museums, and taxicabs—especially since she’ll get to see her dreamy supermodel boyfriend, Nick. Except . . . when her parents said New York, they meant a tiny, boring town two hours from the city by train. Diving back into modeling should be just the right distraction. But can a geek girl stand out in the fashion capital of America?

Holly Smale was unexpectedly spotted by a top London modeling agency at the age of fifteen and spent the following two years falling over on catwalks, going bright red, and breaking things she couldn't afford to replace. By the time she had graduated from Bristol University with a BA in English Literature and an MA in Shakespeare, she had given up modeling and set herself on the path to becoming a full-time writer. Geek Girl was the #1 bestselling young adult fiction title in the UK in 2013. It was shortlisted for several major awards, including the Roald Dahl Funny Prize. Holly currently lives in London, England.

PRAISE FOR GEEK GIRL: MODEL MISFIT: “Smale writes short, punchy chapters that keep the narrative and the comedy flowing constantly. Her highly individual characterizations add enormous zip to the book, but it’s Harriet’s geeky quips that give the book its life.” — Kirkus Reviews

PRAISE FOR GEEK GIRL: “A smash hit in the UK, this is a cheeky, fabulous, fun read for anyone who has dreamed of a fresh start.” — ALA Booklist

“Quirky, likable, and geeky, Harriet is an outsider to the modeling world but possesses a natural charm that is everything the fashion world needs. Pure fun.” — School Library Journal

“Harriet is irresistible. Readers will experience love at first chapter for this geek girl who always manages to hold on to her sense of humor as she navigates the treacherous worlds of school friendships and high-fashion modeling.” — Voice of Youth Advocates (VOYA)