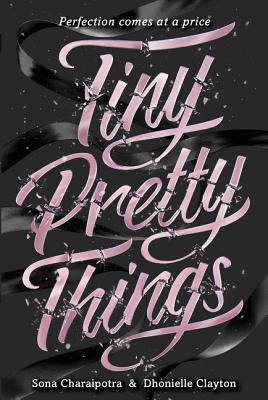 Now a Netflix TV show! Black Swan meets Pretty Little Liars in this soapy, drama-packed novel featuring diverse characters who will do anything to be the prima at their elite ballet school.

From the New York Times-bestselling author of The Belles, Dhonielle Clayton, and the author of the acclaimed Symptoms of a Heartbreak, Sona Charaipotra.

Gigi, Bette, and June, three top students at an exclusive Manhattan ballet school, have seen their fair share of drama. Free-spirited new girl Gigi just wants to dance—but the very act might kill her. Privileged New Yorker Bette's desire to escape the shadow of her ballet-star sister brings out a dangerous edge in her. And perfectionist June needs to land a lead role this year or her controlling mother will put an end to her dancing dreams forever.

When every dancer is both friend and foe, the girls will sacrifice, manipulate, and backstab to be the best of the best.

Sona Charaipotra is the author of Symptoms of a Heartbreak and How Maya Got Fierce, and co-author of The Rumor Game and Tiny Pretty Things, now a Netflix original series. She earned her Masters in screenwriting from NYU and an MFA in creative writing from the New School. A working journalist, Sona has held editorial roles at People, TeenPeople, ABCNews.com, MSN, several parenting publications, the Barnes & Noble Teen Blog (RIP), and, most recently, as senior editor of trends and features at Parents.com. She has contributed to publications from the New York Times to TeenVogue. She is a former We Need Diverse Books board member, and co-founded CAKE Literary, a boutique book packager focused on high concept diverse titles. Find her on the web talking about books, Bollywood movies, and chai.

Dhonielle Clayton is the New York Times bestselling author of the Belles series and The Marvellers and the coauthor of The Rumor Game and the Tiny Pretty Things duology, which was made into a Netflix original series. She is COO of the nonprofit We Need Diverse Books and the owner of Cake Creative.

“A page–turner with a heart.” — Kirkus Reviews

“Appealing both to dancers and drama lovers, this engaging, pulpy read skillfully explores a variety of issues, from sexual orientation to ethnic identity to single–parent households, in a glamorous, high–stakes setting.” — Booklist

“Diversity is organically spotlighted [in this] fun and fast read.” — School Library Journal

“A beautiful example of diversity in characters and settings.” — Voice of Youth Advocates (VOYA)

“Charaipotra and Clayton skillfully craft three distinctive, complex characters. This enticing glimpse into the ballet world is rich with detail and drama as the authors highlight its glamour and darkness.” — Publishers Weekly

It’s impossible not to get sucked in, and the cast of characters is so diverse and fully realized, you root even for the nastiest of them. — Francesca Zappia, author of Made You Up