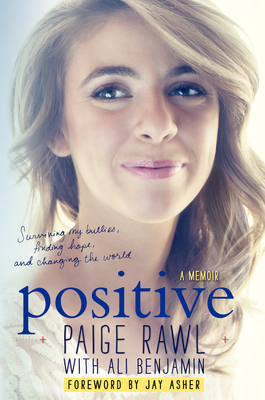 An astonishing memoir for the untold number of children whose lives have been touched by bullying. Positive is a must-read for teens, their parents, educators, and administrators—a brave, visceral work that will save lives and resonate deeply.

Paige Rawl has been HIV positive since birth, but growing up, she never felt like her illness defined her.

On an unremarkable day in middle school, she disclosed to a friend her HIV-positive status—and within hours the bullying began. From that moment forward, every day was like walking through a minefield. Paige was never sure when or from where the next text, taunt, or hateful message would come. Then one night, desperate for escape, fifteen-year-old Paige found herself in her bathroom staring at a bottle of sleeping pills.

That could have been the end of her story. Instead, it was only the beginning. Paige's memoir, co-written with bestselling author Ali Benjamin (The Truth About Jellyfish), calls for readers to choose action over complacency, compassion over cruelty—and above all, to be Positive.

Paige continues to speak publicly about HIV and bullying, participate in conferences, and contribute to advocacy projects in and beyond her home state of Indiana. Paige has served as an ambassador for the Elizabeth Glaser Pediatric AIDS Foundation. She hopes that her continued work in this field can help change the way her generation thinks and talks about HIV/AIDS and bullying. To all HIV-positive youth, Paige consistently affirms, “You are living with HIV, but HIV is not who you are.”

Paige Rawl is an accomplished speaker and an inspirational figure for the tens of thousands of kids to whom she has spoken. Today, Paige is a national youth advocate, antibullying crusader, and powerful HIV/AIDS educator. Paige has been featured in multiple national media outlets, including USA Today, People magazine, Seventeen magazine, Nick News with Linda Ellerbee, the Huffington Post, and Poz magazine. Since Paige was eight years old, she has participated enthusiastically in pageants. Most recently, Paige was Miss Indiana Teen Essence 2011 and Miss Indiana High School America 2012. She is currently a student at Ball State University, where she plans to study molecular biology.

Ali Benjamin's work has appeared in print, online, and on television. She lives with her family in rural Massachusetts.

“Rawl and Benjamin deftly capture the mindset of middle schooler Paige with anecdotes that reveal the teen’s innocence and naïveté. They tackle tough subjects such as suicide delicately but honestly. Readers will come away feeling inspired by Rawl’s work as an HIV/AIDS speaker and anti-bullying advocate.” — Kirkus Reviews

“This realistic and honest biography of a young woman living with HIV will draw readers in, shedding light on this difficult topic. The book beautifully conveys what it’s like to grow up with HIV, dispelling myths about the virus and imparting useful knowledge.” — School Library Journal