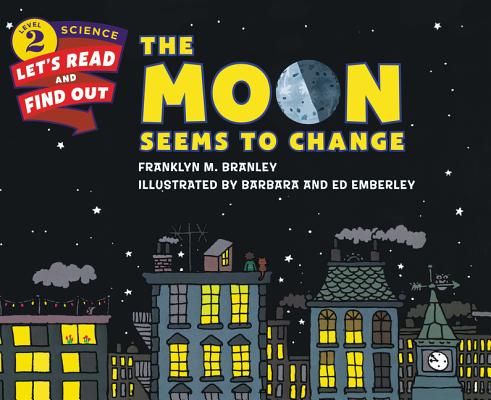 Read and find out about the phases of the moon in this colorfully illustrated nonfiction picture book.

This clear and appealing science book for early elementary age kids, both at home and in the classroom, introduces basic information about the moon.

Have you noticed that the moon sometimes seems to grow and shrink? Does it look like a big round ball? Or is it just a sliver of light in the sky? The moon seems to change. But it doesn't really. The moon revolves around the Earth. It takes about four weeks to make the journey, and as it travels around we can only see certain parts of it. Try the simple experiment described inside using an orange, a pencil, and a flashlight, and you'll understand why the moon seems to change.

This is a Level 2 Let's-Read-and-Find-Out, which means the book explores more challenging concepts for children in the primary grades. The 100+ titles in this leading nonfiction series are:

Books in this series support the Common Core Learning Standards, Next Generation Science Standards, and the Science, Technology, Engineering, and Math (STEM) standards. Let's-Read-and-Find-Out is the winner of the American Association for the Advancement of Science/Subaru Science Books & Films Prize for Outstanding Science Series.

Franklyn M. Branley was the originator of the Let's-Read-and-Find-Out Science series and the author of close to 150 popular books about scientific topics for young readers of all ages. He was Astronomer Emeritus and former Chairman of the American Museum of Natural History-Hayden Planetarium.

Ed Emberley has written and illustrated over 60 children's books, including the Drawing Book series. He and his wife, Barbara Emberley, have collaborated on several books, most notably Drummer Hoff, winner of the 1968 Caldecott Medal.

Mr. and Mrs. Emberley have illustrated several other Let's-Read-and-Find-Out Science books. They live in Ipswich, Massachusetts.