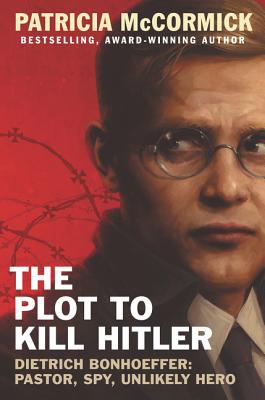 Perfect for fans of suspenseful nonfiction such as books by Steve Sheinkin, this is a page-turning narrative about Dietrich Bonhoeffer, a pastor and pacifist who became an unlikely hero during World War II and took part in a plot to kill Hitler. Written by two-time National Book Award finalist Patricia McCormick, author of Sold and Never Fall Down and coauthor of the young reader’s edition of I Am Malala.

It was April 5, 1943, and the Gestapo would arrive any minute. Dietrich Bonhoeffer had been expecting this day for a long time. He had put his papers in order—and left a few notes specifically for Hitler’s men to see. Two SS agents climbed the stairs and told the boyish-looking Bonhoeffer to come with them. He calmly said good-bye to his parents, put his Bible under his arm, and left. Upstairs there was proof, in his own handwriting, that this quiet young minister was part of a conspiracy to kill Adolf Hitler.

This compelling, brilliantly researched account includes the remarkable discovery that Bonhoeffer was one of the first people to provide evidence to the Allies that Jews were being deported to death camps. It takes readers from his privileged early childhood to the studies and travel that would introduce him to peace activists around the world—eventually putting this gentle, scholarly pacifist on a deadly course to assassinate one of the most ruthless dictators in history. The Plot to Kill Hitler provides fascinating insights into what makes someone stand up for what’s right when no one else is standing with you. It is a question that every generation must answer again and again.

With black-and-white photographs, fascinating sidebars, and thoroughly researched details, this book should be essential reading.

Patricia McCormick is a former journalist and a two-time National Book Award finalist whose books include Cut, Sold, Never Fall Down, The Plot to Kill Hitler, Sergeant Reckless: The True Story of the Little Horse Who Became a Hero, and the young readers edition of I Am Malala. Patricia lives in New York. You can visit her online at www.pattymccormick.com.

★ “Offers a lucid history of the rise of Nazi Germany and a dramatic account of one man’s resistance to evil.” — Publishers Weekly (starred review)

★ “A tragic, inspirational, and quite unusual tale of a man who was the moral center of a resistance movement that, though it failed, continues to live on in international memory.” — Booklist (starred review)

“Readers will discover how compelling a story about ideas and ideals can be.” — Bulletin of the Center for Children’s Books

Praise for NEVER FALL DOWN: “One of the most inspiring and powerful books I’ve ever read. Never Fall Down can teach us all about finding the courage to speak our truth and change the world.”- — Archbishop Desmond Tutu

Praise for NEVER FALL DOWN: “Following the pattern of excellence McCormick began with her novel SOLD, she has created another amazing story through skilled and patient research.” — Voice of Youth Advocates (VOYA) (starred review)

Praise for PURPLE HEART: “Gripping details of existence in a war zone bring this to life.” — ALA Booklist

Praise for SOLD: “Hard-hitting ... poignant. The author beautifully balances the harshness of brothel life with the poignant relationships among its residents.” — Publishers Weekly (starred review)

Praise for CUT: “This novel, like Laurie Halse Anderson’s Speak, sympathetically and authentically renders the difficulties of giving voice to a very real sense of harm and powerlessness.” — Publishers Weekly (starred review)

Praise for CUT: “McCormick tackles a side of mental illness that is rarely seen in young adult fiction in a believable and sensitive manner.”- — Kirkus Reviews (starred review)

Praise for CUT: “You will not soon forget a girl named Callie and this remarkable novel.” — Robert Cormier

Praise for CUT: “CUT is one of the best young-adult novels in years. Riveting and hopeful, sweet, heartbreaking.’” — Boston Globe