Resurrecting Easter: How the West Lost and the East Kept the Original Easter Vision (Hardcover) 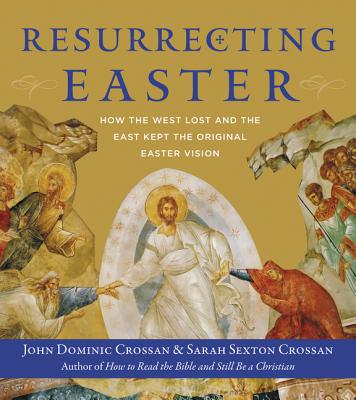 Resurrecting Easter: How the West Lost and the East Kept the Original Easter Vision (Hardcover)

In this four-color illustrated journey that is part travelogue and part theological investigation, bestselling author and acclaimed Bible scholar John Dominic Crossan and his wife Sarah painstakingly travel throughout the ancient Eastern church, documenting through text and image a completely different model for understanding Easter’s resurrection story, one that provides promise and hope for us today.

Traveling the world, the Crossans noticed a surprising difference in how the Eastern Church considers Jesus’ resurrection—an event not described in the Bible. At Saint Barbara’s Church in Cairo, they found a painting in which the risen Jesus grasps the hands of other figures around him. Unlike the Western image of a solitary Jesus rising from an empty tomb that he viewed across Eastern Europe, Asia, and the Middle East, the Crossans saw images of the resurrection depicting a Jesus grasping the hands of figures around him, or lifting Adam and Eve to heaven from Hades or hell, or carrying the old and sick to the afterlife. They discovered that the standard image for the Resurrection in Eastern Christianity is communal and collective, something unique from the solitary depiction of the resurrection in Western Christianity.

Fifteen years in the making, Resurrecting Easter reflects on this divide in how the Western and Eastern churches depict the resurrection and its implications. The Crossans argue that the West has gutted the heart of Christianity’s understanding of the resurrection by rejecting that once-common communal iconography in favor of an individualistic vision. As they examine the ubiquitous Eastern imagery of Jesus freeing Eve from Hades while ascending to heaven, the Crossans suggest that this iconography raises profound questions about Christian morality and forgiveness.

A fundamentally different way of understand the story of Jesus’ rebirth illustrated with 130 images, Resurrecting Easter introduces an inclusive, traditional community-based ideal that offers renewed hope and possibilities for our fractured modern society.

John Dominic Crossan, professor emeritus at DePaul University, is widely regarded as the foremost historical Jesus scholar of our time. He is the author of several bestselling books, including The Historical Jesus, How to Read the Bible and Still Be a Christian, God and Empire, Jesus: A Revolutionary Biography, The Greatest Prayer, The Last Week, and The Power of Parable. He lives in Minneola, Florida.

“Examine how Eastern Christianity differs from Western tradition . . . the West looks at Christ’s resurrection as an individual act, while Eastern Christianity views it as universal, encompassing the whole world. Readers interested in early Christian history or theology will want to give this a try.” — Booklist

“This profound, radical work [and] important book . . . sharply photographed by Sarah and keenly described by John . . . considers the ways Christian iconography surrounding the Resurrection has evolved over centuries and continents in response to cultural changes.” — Publishers Weekly (starred review)

“A fascinating argument [about] the divergences between the Eastern and the Western artistic traditions…I’ll just recommend that you go ahead out and get Resurrecting Easter because a lot of these images are going to tell the story in ways that just hearing about it won’t.” — Nathan P. Gilmour, The Christian Humanist

“A beautiful book, loaded with sharp, full-color images of resurrection scenes from East and West. My mind was stirred by the provocative thesis that the social resurrection of the East might be a timely gift to Western Christians.” — Englewood Review of Books

“From journeying to various churches and ancient sites with the Crossans, [we come] to appreciate the universal nature of the Resurrection. This transforms the event from one that involves only Jesus into one that involves him plus humanity. Easter may never be the same for me again.” — Our Sunday Visitor

“A beautiful presentation in both text and imagery.”
— Pastoral Liturgy