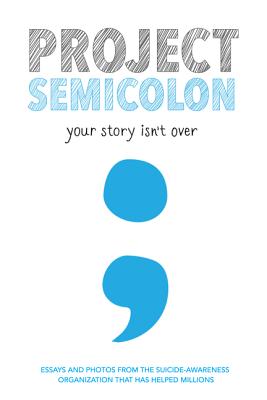 For fans of PostSecret, Humans of New York, and If You Feel Too Much, this collection from suicide-awareness organization Project Semicolon features stories and photos from those struggling with mental illness.

Project Semicolon began in 2013 to spread a message of hope: No one struggling with a mental illness is alone; you, too, can survive and live a life filled with joy and love. In support of the project and its message, thousands of people all over the world have gotten semicolon tattoos and shared photos of them, often alongside stories of hardship, growth, and rebirth.

Project Semicolon: Your Story Isn't Over reveals dozens of new portraits and stories from people of all ages talking about what they have endured and what they want for their futures. This represents a new step in the movement and a new awareness around those who struggle with mental illness and those who support them. At once heartfelt, unflinchingly honest, and eternally hopeful, this collection tells a story of choice: every day you choose to live and let your story continue on.

Learn more about the project at www.projectsemicolon.com.

In 2013, Project Semicolon—founded by Amy Bleuel—began with a single story that inspired other people to share their experiences with mental illness. As one story grew to thousands, the project quickly went viral, giving birth to a nonprofit organization. Now Project Semicolon is an internationally known movement in suicide prevention and a source of hope, encouragement, and support for people worldwide. You can visit the project at www.projectsemicolon.com.

“Readers will be captivated by the raw and candid stories in this inspiring book ... This invaluable book, with useful resources at the end, helps remove the stigma about mental illness and offers heartfelt advice, encouragement, and, most of all, hope.” — Booklist