Girl Code: Gaming, Going Viral, and Getting It Done (Hardcover) 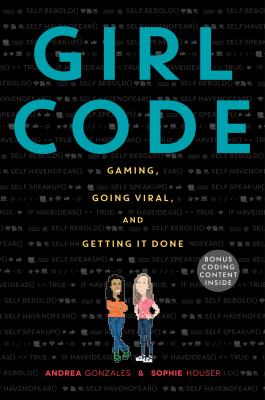 Girl Code: Gaming, Going Viral, and Getting It Done (Hardcover)

Perfect for aspiring coders everywhere, Girl Code is the story of two teenage tech phenoms who met at Girls Who Code summer camp, teamed up to create a viral video game, and ended up becoming world famous. The book also includes bonus content to help you start coding!

Through the success of their video game, Andy and Sophie got unprecedented access to some of the biggest start-ups and tech companies, and now they’re sharing what they’ve seen. Their video game and their commitment to inspiring young women have been covered by the Huffington Post, Buzzfeed, CNN, Teen Vogue, Jezebel, the Today show, and many more.

Get ready for an inside look at the tech industry, the true power of coding, and some of the amazing women who are shaping the world. Andy and Sophie reveal not only what they’ve learned about opportunities in science and technology but also the true value of discovering your own voice and creativity.

Andrea “Andy” Gonzales is a graduate of Hunter College High School and is now attending the University of North Carolina at Chapel Hill as a Robertson Scholar. The summer before her freshman year of high school, Andy started learning to code. Since then, she’s been passionate about computer science and women in science, technology, engineering, and mathematics (STEM). When Andy attended Girls Who Code, she learned the power of working with other girls, and that led to the creation of the video game Tampon Run, which she co-built with Sophie Houser. Tampon Run’s success exceeded all expectations, and Andy was thrown into a world outside of her high school. Beyond her passion for computer science, Andy is a music, comic book, and video game enthusiast. She looks forward to remaining an active advocate for women in computer science.

Sophie Houser is a student at Brown University who learned to code at the Girls Who Code summer program. As her final project she co-created a game called Tampon Run with Andrea Gonzales to break down the menstrual taboo in society. The game went viral, throwing her into the limelight of the press, the public, and the tech world. In addition to coding, Sophie also enjoys laughing with her friends, wearing socks with interesting patterns, and Photoshopping funny scenes. She is pursuing all of these passions as well as many more at college and beyond.

“Tech-centered empowerment for those who feel voiceless.” — Kirkus Reviews

“[Andrea and Sophie’s] intelligence, humanity, creativity, seriousness of purpose, and humor will stick with readers, and inspire them.” — Publishers Weekly

“Gonzales’s and Houser’s writing styles are conversational and work well to dispel the aura of inaccessibility that often surrounds works on technology… Inspiring and hopeful; a great addition to libraries with novice and expert coders alike” — School Library Journal

“Set against the backdrop of coding camp, Girl Code is the story of two teen girls who create a viral video game and become famous—except this story isn’t fiction.” (from the article “10 Books About Coding to Inspire Girls to Lead the Next Tech Revolution”) — Brightly