The Pagan Book of Living and Dying: T/K (Paperback) 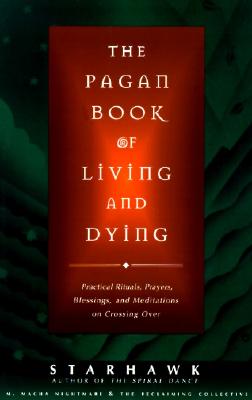 The Pagan Book of Living and Dying: T/K (Paperback)

RITUALS AND RESOURCES FOR HONOURING DEATH IN THE CIRCLE OF LIFE

Birth,growth,death,and rebirth are a cycle that forms the underlying order of the universe. This is the core of Pagan belief – and the heart of this unique resource guide to de

Starhawk is the author of nine books, including her bestselling The Spiral Dance, The Pagan Book of Living and Dying, and Webs of Power, winner of the 2003 Nautilus Award for social change. She has an international reputation, and her works have been translated into many different languages. Starhawk is also a columnist for beliefnet.com and ZNet. A veteran of progressive movements who is deeply committed to bringing the techniques and creative power of spirituality to political activism, she travels internationally, teaching magic, the tools of ritual, and the skills of activism. Starhawk lives part-time in San Francisco, in a collective house with her partner and friends, and part-time in a little hut in the woods in western Sonoma County, where she practices permaculture in her extensive gardens and writes.

M. Macha NightMare, Priestess and Witch, has chosen to develop her skills as a collaborative ritualist and author as her contribution to our emerging Pagan culture. Early in her journey on the path of Witchcraft, Macha joined in the formation of Reclaiming Collective, to teach Craft and to perform public sabbats in San Francisco. The collective evolved into a Craft tradition, and eventually dissolved itself in 1997, to re-emerged as a much larger and more inclusive entity. She co-created, with Starhawk, The Pagan Book of Living and Dying: Practical Rituals, Prayers, Blessings, and Meditations on Crossing Over, HarperSan Francisco, 1997, and is author of Witchcraft and the Web: Weaving Pagan Traditions Online, ECW Press, Montreal, November 2001. Her writing has appeared in many periodicals, and she has spoken on behalf of the Craft to electronic and print media.

Macha holds Elder and ministerial credentials through The Covenant of the Goddess (CoG), the oldest and largest non-denominational organization of Witches in the United States. A member since 1981, she is a former National First Officer and has served the Covenant in many other capacities. She is on the teaching faculty of Cherry Hill [Pagan] Seminary in Bethel, Vermont, where she also serves on the Pagan Pastoral Counseling Advisory Panel.

She is a member of the Biodiversity Project Spirituality Working Group, to increase biodiversity awareness, preservation, and activism within religious communities. She also works with the Sacred Dying Foundation in educating funeral professionals and hospice workers about Pagan beliefs and practices about death and dying. To keep current on Pagan research, she participates in the Nature Religion Scholars Network.

Her matron is Kali Ma. Her magical practice is inspired by feminism and a concern for the health of our planet, and is informed by Celtic, Hindu and Tibetan practices, the sacred art of tantra, and the magic of enchantment. When the opportunity presents itself, Macha travels the broomstick circuit, where she enjoys immersing herself in the diverse community that is American Witchcraft.

She lives in Marin County, California with her beloved partner Corby and their thwo cats. The light of her life is her daughter Deirdre Blessing.