Almost Adulting: All You Need to Know to Get it Together (Sort Of) (Paperback) 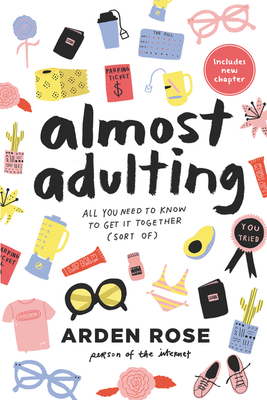 Almost Adulting: All You Need to Know to Get it Together (Sort Of) (Paperback)

For fans of Grace Helbig and Alexa Chung comes a fresh, hilarious guide to growing up your way from social media influencer and lifestyle vlogger Arden Rose. Now in paperback with a brand-new chapter with tips from Arden about how to travel in style!

In Almost Adulting—perfect for budding adults, failing adults, and eaters of microwave mug brownies—Arden tells you how to survive your future adulthood. Topics include:

By the end of the book—a mash-up of essays, lists, and artwork—you'll have learned not only how to dress yourself, how to travel alone, how to talk to strangers online, and how to date strangers (in PERSON!), but also how to pass as a real, functioning, appropriately socialized adult.

Arden Rose is an actress, a producer, a comedian, and the creator of the wildly popular YouTube channel Arden Rose. Her devotion to creating content that is equal parts quirky and sophisticated has helped her build a loyal following of millions of fans. Arden can be seen on Verizon’s go90 social entertainment platform, starring in New Form Digital’s Mr. Student Body President, produced by Ron Howard and Brian Grazer, and in the second season of the hit show Guidance.