What If It's Us (Paperback) 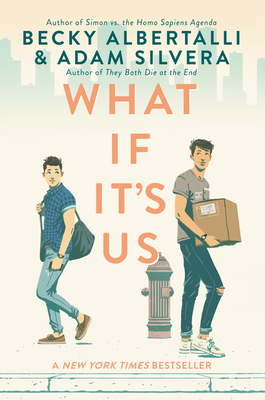 What If It's Us (Paperback)

“When Arthur goes to New York for the summer, he expects it to be a lot like the Broadway plays he adores. But it's not. Ben, on the other hand, is much more pragmatic, in that native New Yorker way. When they meet, Arthur falls head over heels almost immediately, and his enthusiasm may rub off a bit on Ben...but things don't exactly work out in real life the way they do on stage. With alternating chapters from Arthur's and Ben's points of view, this is another wonderful read from Albertalli and Silvera, and fans of both authors won't be disappointed (fans of musical theater will love it even more).”
— Melissa Oates, Fiction Addiction, Greenville, SC

Critically acclaimed and bestselling authors Becky Albertalli and Adam Silvera combine their talents in this smart, funny, heartfelt collaboration about two very different boys who can’t decide if the universe is pushing them together—or pulling them apart.

ARTHUR is only in New York for the summer, but if Broadway has taught him anything, it’s that the universe can deliver a showstopping romance when you least expect it.

BEN thinks the universe needs to mind its business. If the universe had his back, he wouldn’t be on his way to the post office carrying a box of his ex-boyfriend’s things.

But when Arthur and Ben meet-cute at the post office, what exactly does the universe have in store for them . . . ?

Maybe nothing. After all, they get separated.

Maybe everything. After all, they get reunited.

But what if they can’t nail a first date even after three do-overs?

What if Arthur tries too hard to make it work and Ben doesn’t try hard enough?

What if life really isn’t like a Broadway play?

But what if it is?

Plus don't miss Here's to Us! Becky Albertalli and Adam Silvera reunite to continue the story of Arthur and Ben, the boys readers first fell for in What If It’s Us.

Becky Albertalli is the number one New York Times bestselling author of William C. Morris Award winner and National Book Award longlist title Simon vs. the Homo Sapiens Agenda (now a major motion picture, Love, Simon); The Upside of Unrequited; Leah on the Offbeat; the Simonverse novella Love, Creekwood; What If It’s Us (cowritten with Adam Silvera); Yes No Maybe So (cowritten with Aisha Saeed); and most recently, Kate in Waiting. Becky lives with her family in Atlanta. You can visit her online at www.beckyalbertalli.com.

Adam Silvera is the number one New York Times bestselling author of More Happy Than Not, History Is All You Left Me, They Both Die at the End, Infinity Son, Infinity Reaper, and—with Becky Albertalli—What If It’s Us. He was named a Publishers Weekly Flying Start for his debut. Adam was born and raised in the Bronx. He was a bookseller before shifting to children’s publishing and has worked at a literary development company and a creative writing website for teens and as a book reviewer of children’s and young adult novels. He is tall for no reason and lives in Los Angeles. Visit him online at www.adamsilvera.com.

★“Fan-favorites Albertalli (Leah on the Offbeat,2018, etc.) and Silvera (They Both Die at the End, 2017, etc.) join forces in this tale of a New York City summer romance. This joyful romance is both sweet and substantial.” — Kirkus Reviews (starred review)

“Two of queer YA fiction’s best writers team up for an infectiously sweet story of young love set against New York’s bustling backdrop. Without a doubt, this is the gay rom-com you’ve been waiting for.” — Entertainment Weekly, “Must List”

“A love story that makes romance cool again. This is how a good romantic comedy should always feel.” — Los Angeles Review of Books

“A happy and often laugh-out-loud-funny rom-com.” — The Horn Book

A Best YA Book of the Year — Paste Magazine

A Best YA Book of the Year — Bustle

A Best Teen Book of the Year — Chicago Public Library