The Arrival of Someday (Paperback) 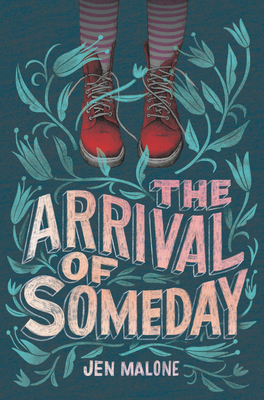 The Arrival of Someday (Paperback)

In this emotionally candid contemporary YA, author Jen Malone delves into the world of a teen whose life is brought to an abrupt halt when she learns she’s in dire need of an organ transplant.

Hard-charging and irrepressible, eighteen-year-old Amelia Linehan could see a roller derby opponent a mile away—and that’s while crouched down, bent over skates, and zooming around a track at the speed of light.

What she couldn’t see coming, however, was the flare-up of the rare liver disorder she was born with. But now it’s the only thing she—and everyone around her—can think about.

With no guarantee of a viable organ transplant, everything Amelia’s been sure of—like college plans or the possibility of one day falling in love—has become a huge question mark, threatening to drag her down into a sea of what-ifs she’s desperate to avoid.

Then a friend from the past shows up. With Will, it’s easy to forget about what’s lurking between the lightness of their time together. She feels alive when all signs point elsewhere.

But with the odds decidedly not in her favor, Amelia knows this feeling can’t last forever. After all, what can?

Jen Malone once spent a year traveling the world solo, met her husband on the highway (literally), and went into labor with her identical twins while on Stevie Nicks's tour bus. Jen is the author of The Arrival of Someday and the YA travel romances Map to the Stars, Wanderlost, and Changes in Latitudes. www.jenmalonewrites.com.

“Malone offers a heart-wrenching but hopeful read for teens. Readers will be inspired.” — ALA Booklist

“Malone frankly traces the changes in [her character’s] physical and psychological states in this meticulously researched, grimly realistic portrait of a teen living with terminal illness. Convincing, empathetic...touches of humor and hope.” — Publishers Weekly