Magnolia Table: A Collection of Recipes for Gathering (Hardcover) 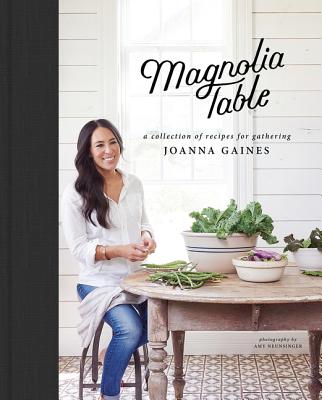 Magnolia Table: A Collection of Recipes for Gathering (Hardcover)

Magnolia Table is infused with Joanna Gaines' warmth and passion for all things family, prepared and served straight from the heart of her home, with recipes inspired by dozens of Gaines family favorites and classic comfort selections from the couple's new Waco restaurant, Magnolia Table.

Jo believes there's no better way to celebrate family and friendship than through the art of togetherness, celebrating tradition, and sharing a great meal. Magnolia Table includes 125 classic recipes—from breakfast, lunch, and dinner to small plates, snacks, and desserts—presenting a modern selection of American classics and personal family favorites. Complemented by her love for her garden, these dishes also incorporate homegrown, seasonal produce at the peak of its flavor. Inside Magnolia Table, you'll find recipes the whole family will enjoy, such as:

Full of personal stories and beautiful photos, Magnolia Table is an invitation to share a seat at the table with Joanna Gaines and her family.

Joanna Gaines is the cofounder of Magnolia, a home and lifestyle brand based in Waco, Texas, which she started with her husband, Chip Gaines, in 2003. Authors of the New York Times bestseller The Magnolia Story, Chip and Joanna have been remodeling homes for nearly two decades. Joanna is also the author of the New York Times bestselling cookbook Magnolia Table and editor in chief of the Magnolia Journal, a lifestyle magazine offering inspiration for your life and home.

“Joanna Gaines just made her first official foray into the food world with the launch of her cookbook, Magnolia Table, and we’re happy she did.” — MyDomaine

“My point is, I know a good biscuit when I see one (and more important, when I taste one). And in my opinion, Joanna Gaines has struck gold with a biscuit recipe that took her a year to develop.” — Huffington Post

“Joanna and Chip Gaines’s announcement that Fixer Upper was ending thankfully coincided with the news of Jo’s first cookbook, Magnolia Table. Seven long months later, that cookbook is finally in stores, and fans have wasted no time singing its praises.” — Delish

“From a beautiful but simple veggie and cheese quiche, to zesty grilled salmon with a refreshing cucumber salad, and a time-tested batch of chocolate chip cookies — each one of Gaines’s recipes holds the power to bring about an effortless gathering anywhere, anytime.” — Refinery 29

“The latest in their growing portfolio includes… Joanna’s first cookbook… As she did with becoming a designer (she never had any formal design experience when she and Chip launched their home-flipping business), she’s taken an unconventional approach to cooking.” — People

“Some people just seem too good to be true. Joanna Gaines is one of those people… I’ve followed her recipes carefully and heeded her advice, and in my opinion, she can add successful cookbook author to her resume.” — Mary Cadden, USA Today

“Joanna Gaines is a multi-media force to be reckoned with… Gaines comes across as so likeable, approachable, and real on TV, and her charm and grace translate effortlessly to every page of Magnolia Table.” — Philadelphia Inquirer

“Anyone who’s ever watched HGTV’s Fixer Upper will immediately recognize Joanna Gaines’s style in her new cookbook… Magnolia Table is filled with family stories and memories surrounding meals; individual favorites… diverse recipes… and some recipes that are used in their restaurant.” — PopSugar

“Joanna Gaines may be famous for her trend-setting taste in interior design, but she’s currently making waves in the culinary world with the release of her first cookbook.” — Real Simple

“Now that the shiplap-loving home décor guru has opened her own restaurant… we’re looking to her new cookbook, Magnolia Table, for every family meal from now on.” — Pure Wow

“Flip open her new cookbook, Magnolia Table, and you’ll quickly find that Fixer Upper star Joanna Gaines can navigate her way around the kitchen just as expertly as she does a construction site or wall of shiplap.” — Tasting Table

“You can bring Gaines into your kitchen with her first cookbook… and it’s a page turner. A lot of cookbooks cross my desk each year. But this one caught my eye. It has a lot of recipes that will appeal to all, especially families.” — Detroit Free Press

“Everything Joanna Gaines touches is beautiful, including every recipe in her cookbook, Magnolia Table.” — Family Circle

“Once upon a time, in a land before the Magnolia Table cookbook, we never dreamed of straying from our family biscuits recipe. But when Joanna Gaines has some thoughts on biscuits, we listen… And having tasted these delectable, crumbly biscuits… we assure you, the detour is worth it.” — Southern Living