Finding the Edge: My Life on the Ice (Hardcover) 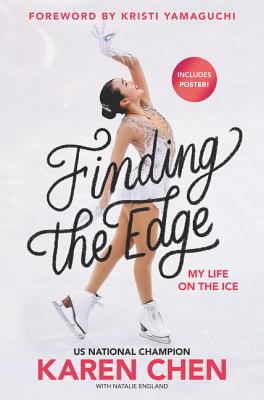 Finding the Edge: My Life on the Ice (Hardcover)

Figure skating icon and U.S. National Champion Karen Chen tells the amazing story of her rise to the top, featuring never-before-seen photos and behind-the-scenes details from her journey on and off the ice!

At seventeen years old, Karen Chen has already achieved what some girls only dream of—and yet it’s only the beginning for this incredibly talented athlete.

The daughter of Taiwanese immigrants, Karen began to figure skate at just five years old. Ten years and many grueling training sessions later, she broke out at the 2015 US Championships with a bronze medal. This was after sustaining a nearly career-ending ankle fracture a year earlier.

In 2017, Karen became the US National Champion, winning gold in two programs and receiving the highest score ever recorded for the short program at the US National level.

Now for the first time, Karen shares the story of how she got where she is today—and where she’s going next. Karen has already overcome astounding obstacles, and her grit, determination, and positive attitude have made her future truly limitless.

In Finding the Edge, she shares, in her own words, what it’s like to be Karen Chen—and what it takes to achieve the impossible.

Karen Chen is an American figure skater. She was the 2017 US national champion, placing fourth at the 2017 World Championships. She also holds a bronze medal from the 2015 US National Championships and two bronze medals from the ISU Challenger Series. Karen was born in Fremont, California, and has been skating since 2005. Finding the Edge is her first book.

Athlete, artist, wife, mother, philanthropist—in each of these things Kristi Yamaguchi embodies the word “champion.” Following her victories at the 1992 Winter Olympics and World Championships, Kristi embarked on a successful professional career that went non-stop for more than a decade. During the years 1992-2002, Kristi toured with Stars on Ice, won numerous professional competitions, frequently appeared on television specials, and collaborated with several choreographers to create diverse programs. She is also the author of Dream Big, Little Pig! and It’s a Big World, Little Pig!

“Chen’s fans and young skating enthusiasts will find much to devour about life as a competitive skater.” — School Library Journal