The New Rules of War: How America Can Win--Against Russia, China, and Other Threats (Paperback) 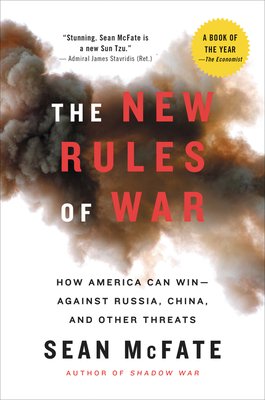 The New Rules of War: How America Can Win--Against Russia, China, and Other Threats (Paperback)

An Economist Book of the Year 2019

Some of the principles of warfare are ancient, others are new, but all described in The New Rules of War will permanently shape war now and in the future. By following them Sean McFate argues, we can prevail. But if we do not, terrorists, rogue states, and others who do not fight conventionally will succeed—and rule the world.

The New Rules of War is an urgent, fascinating exploration of war—past, present and future—and what we must do if we want to win today from an 82nd Airborne veteran, former private military contractor, and professor of war studies at the National Defense University.

War is timeless. Some things change—weapons, tactics, technology, leadership, objectives—but our desire to go into battle does not. We are living in the age of Durable Disorder—a period of unrest created by numerous factors: China’s rise, Russia’s resurgence, America’s retreat, global terrorism, international criminal empires, climate change, dwindling natural resources, and bloody civil wars. Sean McFate has been on the front lines of deep state conflicts and has studied and taught the history and practice of war. He’s seen firsthand the horrors of battle and understands the depth and complexity of the current global military situation.

This devastating turmoil has given rise to difficult questions. What is the future of war? How can we survive? If Americans are drawn into major armed conflict, can we win? McFate calls upon the legends of military study Carl von Clausewitz, Sun Tzu, and others, as well as his own experience, and carefully constructs the new rules for the future of military engagement, the ways we can fight and win in an age of entropy: one where corporations, mercenaries, and rogue states have more power and ‘nation states’ have less. With examples from the Roman conquest, World War II, Vietnam, Afghanistan and others, he tackles the differences between conventional and future war, the danger in believing that technology will save us, the genuine leverage of psychological and ‘shadow’ warfare, and much more. McFate’s new rules distill the essence of war today, describing what it is in the real world, not what we believe or wish it to be.

Sean McFate is a professor of strategy at the National Defense University and Georgetown University’s School of Foreign Service. He is also a Senior Fellow at the Atlantic Council, a think tank. He served as a paratrooper in the US Army’s 82nd Airborne Division and then worked for a major private military corporation, where he ran operations similar to those in this book. He is the author of The Modern Mercenary: Private Armies and What They Mean for World Order, and holds a BA from Brown University, a MA from Harvard’s Kennedy School of Government, and a PhD in international relations from the London School of Economics and Political Science (LSE). He lives with his wife in Washington, DC.

“The sharpest account of the dilemmas of war and peace I’ve read in years… A wonderful read.” — Evening Standard (UK)

“Why do western powers keep getting beaten when they go to war? This hard-hitting polemic by a former US paratrooper explains why – we are addicted to expensive, big tech that is useless against guerrillas.” — The Times (UK)

“[This] iconoclastic book is being hailed by radicals as a wake-up call to governments and armed forces everywhere… Much of what [McFate] says convinces… If we go on fighting our wars the old way, we shall go on losing them.” — Max Hastings, The Sunday Times

“An important handbook for a new generation of warriors and a primer for the conduct of contemporary armed conflict. The question posed is how to secure a favorable outcome when the concept of victory is so fluid and shaped by perception as much as any military result.” — Sir Richard Dearlove, former director, MI6

“McFate’s experience… inform(s) this standout work of military science… An authoritative and skillful analysis of the state of war today.” — Publishers Weekly

“The future is one of deep uncertainty and few offer a bold or clear exposition of its character. McFate has done just that and the results are both compelling and persuasive. If we heed his advice, we may make the necessary adjustments in time to avert a serious catastrophe.” — Prof. Robert Johnson, Director of the Changing Character of War Program, Oxford University

“A fascinating and disturbing book . . . Mr. McFate writes with an insider’s knowledge ... the worrying trends he describes make this book a powerful call to arms to those who do not want a world awash with mercenaries.” — The Economist on The Modern Mercenary

“Thought-provoking . . . Some of [McFate’s] stories have never been told before, which makes the book particularly valuable.” — Foreign Affairs on The Modern Mercenary

“Essential reading for anyone who wants to understand a new component of modern warfare.”  — General Stanley A. McChrystal on The Modern Mercenary

“A must read for political leaders who are drawn into having to fight today’s wars.”  — Sir Richard Dearlove, former head of MI6 on The Modern Mercenary

“With well-drawn and fascinating characters and ground level espionage and combat sure to please fans of Brad Thor, Tom Clancy, and Daniel Silva, Shadow War is simply one of the most entertaining and intriguing books I’ve read in quite some time.” — Mark Greaney, #1 NYT Bestselling author of Back Blast

“Step aside, faux thriller writers and armchair warrior storytellers. Ex-mercenary Sean McFate has produced a first novel that’s assured, authentic, timely, gritty, and most of all real... I enjoyed the hell out of it.” — C.J. Box, New York Times Best-selling Author of Badlands and Off the Grid

“Locke is another strong hero in the growing subgenre of black-ops thrillers, and Deep Black is a maze of treachery and intrigue to the very end.” — Booklist Online

“A full-tilt thriller… Full of tense moments, survival situations, gun fire, explosions, and even a romance (even if it is short lived)…. I’m definitely looking forward to the next installment of the Tom Locke saga.” — BlackDogSpeaks.com on Shadow War

“Shadow War has pace like a catapult, sudden and fierce, and it will hit readers straight between the eyes.” — Ted Bell, New York Times bestselling author of Patriot on Shadow War

“Stunning. Sean McFate is a new Sun Tzu…. Drawing on history and ancient principles, McFate masterfully explains how armed conflict works today. The New Rules of War is a must read for anyone who wants to know how war will be fought tomorrow and how the winners will win.” — Admiral James Stavridis (retired), former Supreme Allied Commander at NATO