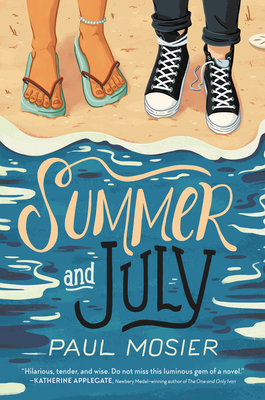 From the critically acclaimed author of Train I Ride and Echo’s Sister comes a moving story of friendship between two girls looking for some happiness in a world that can be a little cruel. Perfect for fans of Rebecca Stead, Ali Standish, and Erin Entrada Kelly.

Twelve-year-old Juillet is preparing for the worst summer ever. She and her mom are staying in the seaside neighborhood of Ocean Park, California, for a month, where her mom will be working at the local hospital and Juillet will be on her own, like always.

Her dad is off in Europe with his new girlfriend, and her best friend, Fern . . . well, Juiller isn’t allowed to talk to Fern anymore. Fern took the blame for Juillet’s goth-girl clothes and “not-real” fears, like sharks and rip currents and the number three.

Then Juillet meets Summer, a local surfer girl who knows the coolest people and places around town. With free-spirited and adventurous Summer, Juillet begins to come out of her shell and face the things weighing her down. But when Summer reveals her own painful secret, it’s Juillet’s turn to be the strong and supportive friend.

Named one of Bank Street College of Education's Best Children’s Books of the Year!

Paul Mosier began writing novels in 2011 but has written in some fashion his entire life. He is married and the father to two daughters, one of whom has passed to the next dimension. He lives near his place of birth in downtown Phoenix, Arizona. He loves listening to baseball on the radio, eating vegetarian food, drinking coffee, and talking nonstop. He has written three critically acclaimed books for middle grade readers: Train I Ride, Echo’s Sister, and Summer and July. Visit him on his blog, novelistpaulmosier.wordpress.com.

“Hilarious, tender and wise, Summer and July is a story about facing our fears and learning to embrace the world. Do not miss this luminous gem of a novel.” — Katherine Applegate, Newbery Medal Winning author of The One and Only Ivan

“Capturing the urgency and intensity of middle-school friendships, what he gets right is important: the thin, confusing line between best buddy and queer crush; the simultaneous need for independence and parental presence; and the ways that adolescent identity is a dance between frustration and buoyancy that can reveal itself in friendship.”  — Publishers Weekly

“This novel is as much a love letter to California as it is a fish-out-of-water, new-friendship-or-budding-romance tale. For readers longing for escapade and sunshine, as well as those struggling with their own demons, Juillet and Summer are sure to bring companionship, understanding, and the urge to catch a few waves. “  — Bulletin of the Center for Children’s Books

“Engaging first-person narrative has emotional openness, wry reflection, and vividly drawn settings. There’s something real and haunting about these vulnerable characters and their journey together. A beach book with some complexity as well as a happy ending.” — Booklist