Prey: Immigration, Islam, and the Erosion of Women's Rights (Hardcover) 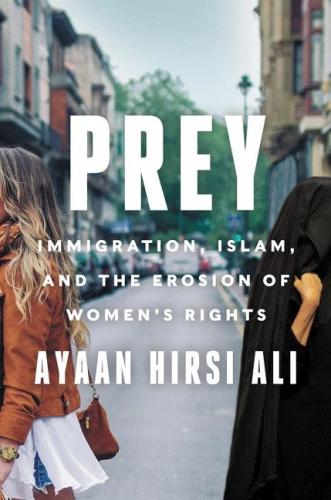 Prey: Immigration, Islam, and the Erosion of Women's Rights (Hardcover)

Why are so few people talking about the eruption of sexual violence and harassment in Europe’s cities? No one in a position of power wants to admit that the problem is linked to the arrival of several million migrants—most of them young men—from Muslim-majority countries.

In Prey, the best-selling author of Infidel, Ayaan Hirsi Ali, presents startling statistics, criminal cases and personal testimony.  Among these facts: In 2014, sexual violence in Western Europe surged following a period of stability. In 2018 Germany, “offences against sexual self-determination” rose 36 percent from their 2014 rate; nearly two-fifths of the suspects were non-German. In Austria in 2017, asylum-seekers were suspects in 11 percent of all reported rapes and sexual harassment cases, despite making up less than 1 percent of the total population.

This violence isn’t a figment of alt-right propaganda, Hirsi Ali insists, even if neo-Nazis exaggerate it. It’s a real problem that Europe—and the world—cannot continue to ignore. She explains why so many young Muslim men who arrive in Europe engage in sexual harassment and violence, tracing the roots of sexual violence in the Muslim world from institutionalized polygamy to the lack of legal and religious protections for women.

A refugee herself, Hirsi Ali is not against immigration. As a child in Somalia, she suffered female genital mutilation; as a young girl in Saudi Arabia, she was made to feel acutely aware of her own vulnerability. Immigration, she argues, requires integration and assimilation. She wants Europeans to reform their broken system—and for Americans to learn from European mistakes. If this doesn’t happen, the calls to exclude new Muslim migrants from Western countries will only grow louder.

Deeply researched and featuring fresh and often shocking revelations, Prey uncovers a sexual assault and harassment crisis in Europe that is turning the clock on women’s rights much further back than the #MeToo movement is advancing it.

Ayaan Hirsi Ali is a Somali-born women’s rights activist, free speech advocate, and the New York Times bestselling author of Infidel, The Caged Virgin, Nomad, Heretic, and The Challenge of Dawa. Born in Mogadishu, Somalia, she grew up in Africa and the Middle East, before seeking asylum in the Netherlands, where she went on to become a member of parliament. Today she lives in the United States with her husband and two sons.

“Prey exposes a shocking wave of sex crimes across supposedly enlightened Europe. In bracing terms, Ayaan Hirsi Ali defends the rights of women while advocating for a new model of integration for immigrants. Casting aside political correctness and conventional wisdom, Prey is a timely reminder that freedom—indeed, civilization itself—is not a birthright but must be nurtured and protected by each generation.” — Senator Thomas Cotton

“Drawing on her hard knocks as a Somali immigrant and triumphs as a European legislator, Ayaan Hirsi Ali confronts multiethnic Europe’s most intractable problem: an inability to defend its feminist culture against the machismo of its mostly Muslim immigrants. Prey is the best book on the subject: broad in its culture, punctilious in its research, bold and original in its arguments.” — Christopher Caldwell

“Throughout Europe, mismanaged immigration policies are eroding the hard-won rights of women. With her signature grace and lucidity, Ayaan Hirsi Ali documents this alarming development and offers bold, original, and humane solutions. Prey is not a diatribe against multiculturalism—it is a guide to preserving and enriching it. This brilliant and timely book is compulsory reading for anyone who cares about the fate of liberal democracy.” — Christina Hoff Sommers

“Prey warns us that if we do not rethink our philosophy for protecting women and children, we risk losing one of Western civilization’s most precious assets: the rule of law.” — Henry A. Kissinger

“In an age of identity politics, the lack of will to deal with our greatest cultural challenges does not make them disappear. It just empowers the most extreme and intolerant voices. In Prey, intrepid civil libertarian Ayaan Hirsi Ali summons the West to confront a remorseless truth: that enabling mass Islamic immigration while lacking the will to acculturate Muslims to Western norms and laws has inevitably eroded the rights and endangered the lives of women—not just Muslim women, all women. A brave and brilliant book.” — Andrew McCarthy

“Prey is a rigorous and shocking exposé of a sexual abuse crisis occurring right in the open, in seemingly progressive Europe. Empathetic and authoritative, Ayaan Hirsi Ali demonstrates why we cannot let political correctness and apathy overwhelm our duty to protect women’s rights.” — Megyn Kelly

“Once again Ayaan Hirsi Ali goes where others do not dare. Here she forensically, carefully, and devastatingly exposes one of the worst—and most ignored—scandals of our time. People of all backgrounds and all political persuasions owe her a debt of gratitude for exposing a scandal that has long cried out for the serious and deep treatment it receives here.” — Douglas Murray

“Reconciling women’s rights in Western countries with mass immigration remains a sensitive subject. In Prey, leading humanitarian Ayaan Hirsi Ali constructively explores this topic, drawing on a wealth of knowledge and data to illustrate key tensions between cultural relativism and women’s rights in the twenty-first century. She courageously urges all of us—men, women, those living in Western countries and those living in non-Western countries—to firmly defend the universality of human rights and ensure their continued preservation.” — Senator Ben Sasse

“In this groundbreaking work of research, Ayaan Hirsi Ali documents a disturbing wave of sexual violence in Europe. A vital and essential work, Prey shows what the next step for #MeToo must be.” — Mark Levin