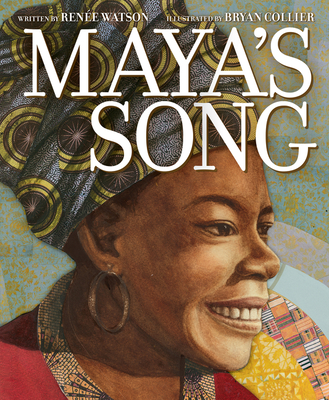 This unforgettable picture book introduces young readers to the life and work of Maya Angelou, whose words have uplifted and inspired generations of readers. The author of the celebrated autobiography I Know Why the Caged Bird Sings, Maya was the first Black person and first woman to recite a poem at a presidential inauguration, and her influence echoes through culture and history. She was also the first Black woman to appear on the United States quarter.

Maya was a preacher, a teacher.

A Black girl whose voice

chased away darkness, ushered in light.

Renée Watson is a #1 New York Times bestselling author. Her young adult novel Piecing Me Together (Bloomsbury, 2017) received a Newbery Honor and Coretta Scott King Award. Her children’s picture books and novels for teens have received several awards and international recognition. Her picture books include A Place Where Hurricanes Happen, Harlem’s Little Blackbird: The Story of Florence Mills, and The 1619 Project: Born on the Water, written with Nikole Hannah-Jones. Renée grew up in Oregon and splits her time between Portland and Harlem.

Bryan Collier has won four Caldecott Honors for Martin’s Big Words by Doreen Rappaport, Rosa by Nikki Giovanni, Trombone Shorty by Troy Andrews, and Dave the Potter by Laban Carrick Hill. He is also the illustrator of the New York Times bestseller All Because You Matter by Tami Charles. His first book, Uptown, won the Coretta Scott King Award and the Ezra Jack Keats Award. He is the recipient of five more Coretta Scott King Awards and three Coretta Scott King Honors.

"Told in a series of vignettes as verse, with Collier’s remarkably textured backdrops shifting as Angelou adapts, changes and matures, “Maya’s Song” is testament to how the worst of life can be the bedrock of beauty and flourishing: 'word-seeds' from 'a whole garden of words, words growing inside.'"
— New York Times Book Review

"Eloquent free verse poems recall pivotal events in the life of Maya Angelou. Layered illustrations reinforce the weight of words—and their absence. This exquisite tribute to one of America’s most influential poets arrives just in time for young people to celebrate Angelou’s appearance on the quarter." — Booklist (starred review)

"A loving tribute in free verse to a writer who found her home, and herself, in her words." — Kirkus Reviews (starred review)

"Collier’s richly textured assemblage of collage and watercolor employs light, pattern, and subtle imagery that add depth to every image... This is a thoughtfully rendered biography of a dazzling figure." — Publishers Weekly (starred review)

"Watson doesn’t shy away from addressing tough topics. Collier’s accomplished illustrations have a strong narrative pull. This eloquent picture book is a portrait of a resilient woman with a deep capacity for using words to find hope in the world." — The Horn Book