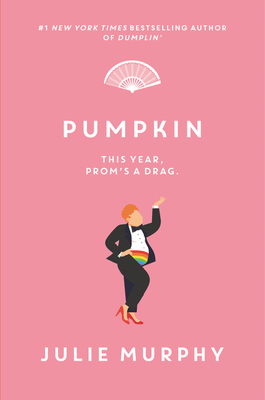 “A wonderful return to Clover City, Pumpkin has all the elements we loved from Dumplin' and Puddin' with lots of cameos of favorite characters. Waylon is at that familiar crossroads of nearing high school graduation and having to plan his next move without really knowing what he wants to do or how to get there. Heartwarming and encouraging!”
— Rebecca Waesch, Joseph-Beth Booksellers, Cincinnati, OH

Waylon Russell Brewer is a fat, openly gay boy stuck in the small West Texas town of Clover City. His plan is to bide his time until he can graduate, move to Austin with his twin sister, Clementine, and finally go Full Waylon so that he can live his Julie-the-hills-are-alive-with-the-sound-of-music-Andrews truth.

So when Clementine deviates from their master plan right after Waylon gets dumped, he throws caution to the wind and creates an audition tape for his favorite TV drag show, Fiercest of Them All. What he doesn’t count on is the tape getting accidentally shared with the entire school. . . . As a result, Waylon is nominated for prom queen as a joke. Clem’s girlfriend, Hannah Perez, also receives a joke nomination for prom king.

Waylon and Hannah decide there’s only one thing to do: run—and leave high school with a bang. A very glittery bang. Along the way, Waylon discovers that there is a lot more to running for prom court than campaign posters and plastic crowns, especially when he has to spend so much time with the very cute and infuriating prom king nominee Tucker Watson.

Waylon will need to learn that the best plan for tomorrow is living for today . . . especially with the help of some fellow queens. . . .

Julie Murphy lives in North Texas with her husband who loves her, her dog who adores her, and her cats who tolerate her. After several wonderful years in the library world, Julie now writes full-time. When she’s not writing or reliving her reference desk glory days, she can be found watching made-for-TV movies, hunting for the perfect slice of cheese pizza, and planning her next great travel adventure. She is also the author of the young adult novels Dumplin’ (now a film on Netflix), Puddin’, Ramona Blue, and Side Effects May Vary. You can visit Julie at www.juliemurphywrites.com.

“With her signature blend of humor, sensitivity, and panache, Murphy has crafted a sensational narrative that is bursting with life and is anything but a drag….Murphy's best-selling Dumplin' series grows bigger and better with every installment, and this book will quickly rule the YA realm.” — ALA Booklist (starred review)

“An aspiring drag queen grows to embrace his body and individuality in this winning YA contemporary novel." — Shelf Awareness (starred review)

“Murphy is at it again with a third return to Clover City and the Dumplin’ universe. Tackling heavy topics with humor, this novel touches on the importance of staying true to yourself even (and especially) when it’s hard. A must-purchase for fans of Murphy’s previous books, a good prom story, and RuPaul’s Drag Race.” — School Library Journal

"[This] novel is full of inspiration, fabulousness, and romance, and readers will be enthralled as they race to learn what happens to Pumpkin and his friends… Enticing as homemade pumpkin pie. Bon appétit!”
— Kirkus Reviews

“Waylon’s combination of self-confidence and self-defense is utterly believable… the stirrings of romance with Tucker are delicious and the plot overall is huggably cheesy, leaving readers cheering for Waylon, his Clover City cohort, and any kids taking a chance to be their full selves right now.” — Bulletin of the Center for Children’s Books

“This third story set in Clover City, Texas, features a genuine and unbreakable sibling bond; a strong romantic connection; and a cast of well-developed supporting characters, including guest appearances from Willowdean and Callie and Millie. Like those protagonists, Waylon learns to love who he is and refuses to settle for anyone who doesn’t…. It’s easy to cheer for Waylon—who eventually triumphs both as himself and as Pumpkin—in this celebration of individuality and self-expression.” — Horn Book Magazine

“Texans and non-Texans alike will appreciate getting to know two strong-minded Lone Star girls.”
— Bulletin of the Center for Children’s Books

“Julie Murphy has created the platonic love story of a lifetime. I am wildly in love with Puddin’.”

— Becky Albertalli, New York Times bestselling author of Leah on the Offbeat and Simon vs. the Homo Sapiens Agenda

Praise for DUMPLIN’: “Will’s singular voice compels readers to think about all that goes into building-and destroying-self-esteem...Splendid”
— ALA Booklist (starred review)

“[A] richly enjoyable novel...a clever and funny book to please lovers of thoughtful romance and secret pageant fans.”
— Bulletin of the Center for Children’s Books

“Genuine, romantic, and with a dash of Texan charm, this is a novel that celebrates being who you are while also acknowledging that it’s incredibly difficult to do.”
— The Horn Book