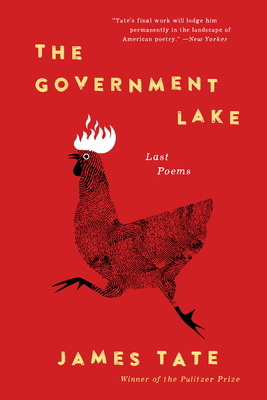 The stunning, startling collection that is also the last work from a major poet

A woman named Mildred starts laying eggs after feathers from wild poultry begin coming down the chimney. A man becomes friends with a bank robber who abducts him and eventually rues his captor’s death. A baby is born transparent.

James Tate’s work, filled with unexpected turns and deadpan exaggeration, “fanciful and grave, mundane and transcendent,” (New York Times) has been among the most defining and significant of our time. In his last collection before his death in 2015, Tate’s dark yet whimsical humor, his emotional acuity, and his keen ear for the absurd are on full display in prose poems that finely constructed and lyrical, surrealistic and provocative.

With The Government Lake, James Tate reminds us why he is one of the great poets of our age and one of the true masters of the form.

James Tate was born in Kansas City, Missouri, in 1943. He is the author of seventeen books of poetry, including Worshipful Company of Fletchers, which won the National Book Award in 1994; Selected Poems, which won the Pulitzer Prize and the William Carlos Williams Award in 1991; and The Lost Pilot, which was selected by Dudley Fitts for the Yale Series of Younger Poets. He has also published a novel and a collection of short stories, as well as edited The 1997 Best American Poetry Anthology. His honors include a National Institute of Arts and Letters Award for Poetry, the Tanning Prize, the Pulitzer Prize, the National Book Award, and fellowships from the Guggenheim Foundation and the National Endowment for the Arts. He teaches at the University of Massachusetts in Amherst.

“The rare American poet who managed to make poems that were at once fanciful and grave, mundane and transcendent. . . . His work is singular in American poetry for marrying goofball humor and childish jouissance to a lyricism that never seems cheap or self-serious-an unusual achievement.” — New York Times Book Review

“A poem out of nothing…is Tate’s genius…Just about anything can happen next in this kind of poetry and that is its attraction.” — Charles Simic