Why Comics?: From Underground to Everywhere (Paperback) 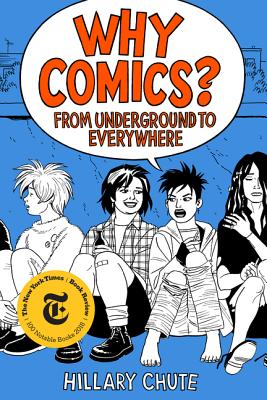 Why Comics?: From Underground to Everywhere (Paperback)

Filled with beautiful color art, dynamic storytelling, and insightful analysis, Hillary Chute reveals what makes one of the most critically acclaimed and popular art forms so unique and appealing, and how it got that way.

Over the past century, fans have elevated comics from the back pages of newspapers into one of our most celebrated forms of culture, from Fun Home, the Tony Award–winning musical based on Alison Bechdel’s groundbreaking graphic memoir, to the dozens of superhero films that are annual blockbusters worldwide. What is the essence of comics’ appeal? What does this art form do that others can’t?

Whether you’ve read every comic you can get your hands on or you’re just starting your journey, Why Comics? has something for you. Author Hillary Chute chronicles comics culture, explaining underground comics (also known as “comix”) and graphic novels, analyzing their evolution, and offering fascinating portraits of the creative men and women behind them. Chute reveals why these works—a blend of concise words and striking visuals—are an extraordinarily powerful form of expression that stimulates us intellectually and emotionally.

Focusing on ten major themes—disaster, superheroes, sex, the suburbs, cities, punk, illness and disability, girls, war, and queerness—Chute explains how comics get their messages across more effectively than any other form. “Why Disaster?” explores how comics are uniquely suited to convey the scale and disorientation of calamity, from Art Spiegelman’s representation of the Holocaust and 9/11 to Keiji Nakazawa’s focus on Hiroshima. “Why the Suburbs?” examines how the work of Chris Ware and Charles Burns illustrates the quiet joys and struggles of suburban existence; and “Why Punk?” delves into how comics inspire and reflect the punk movement’s DIY aesthetics—giving birth to a democratic medium increasingly embraced by some of today’s most significant artists.

Featuring full-color reproductions of more than one hundred essential pages and panels, including some famous but never-before-reprinted images from comics legends, Why Comics? is an indispensable guide that offers a deep understanding of this influential art form and its masters.

Hillary Chute is a New York Times Book Review comics and graphic novels columnist, professor of English and Art + Design at Northeastern University, and the author of Graphic Women: Life Narrative and Contemporary Comics; Outside the Box: Interviews with Contemporary Cartoonists; and Disaster Drawn: Visual Witness, Comics, and Documentary Form. She is also the associate editor of Art Spiegelman’s MetaMaus. She lives in Cambridge, Massachusetts.

“[Chute] has been leading the charge with some of the most sophisticated comics criticism to date… From Chute’s spectacular close readings it becomes clear that comics is, unquestionably, literature.” — Times Literary Supplement

“Now that Art Spiegelman’s Maus and Alison Bechdel’s Fun Home have found both commercial and critical success, at last there is a brilliant investigation into the unique powers of the medium.” — National Book Review

“As accessible as it is engaging, Why Comics? reaffirms Chute’s place as a leading voice in comics criticism while providing casual readers with valuable insights into the contemporary world of graphic storytelling.” — Los Angeles Review of Books

“Why Comics? is a must-read, filling in a significant portion of the vast jigsaw puzzle of understanding comics.” — Comics Journal

“Why Comics? is a riveting compendium of history, humor, politics, punk, sex, violence, and the occasional superhero. Hillary Chute has given us the stories behind some of the most subversive literature of our time. You want to read this book.” — Lauren Redniss, MacArthur Fellow and Author of Radioactive and Thunder & Lightning

“Hillary Chute is the scholar comics has been waiting for—passionate, eloquent, encyclopedically knowledgeable, and profoundly in sync with the medium.” — Lev Grossman, New York Times bestselling author of The Magicians

“Anyone seeking a persuasive and perceptive entryway to the world of comics need look no further.” — Publishers Weekly

“Chute elevates comics to literature when dissecting panels, text, and drawing techniques in the more than 100 reprints within the book.” — Library Journal (starred review)

“As charmingly illustrated and approachable as the works it considers.” — Chicago Tribune

“[Chute’s] writing is not just effortlessly accessible, it’s also invitingly engaging to anyone curious about the medium, from casual fan to seasoned pro.” — PRINT

“Chute writes from an unassailable position of expertise. . . . [and] she has a gift for peppering poetic language into information-dense prose, striking a tone that’s at once breezy and authoritative.” — PopMatters

“When it comes to comics, Hillary Chute asks all the right questions.” — Scott McCloud, Author of Understanding Comics and The Sculptor

“Why Comics? is as entertaining as it is revelatory, and Hillary Chute is one of the most engaging thinkers afoot in criticism today. Ideas tumble from these pages.” — Michael Tisserand, author of Krazy: George Herriman, A Life in Black and White

“Hillary Chute, who may be to comics studies what Art Spiegelman is to comics, brings her academic rigor to an examination of this oft-underappreciated art form. Her supple, nuanced understanding of how to read comics—not only why—begins with an emphasis on the difference between simply reading comics and knowing how to read comics, and continues with a deep dive into genres and themes.” — Karen Green, Curator for Comics and Cartoons, Columbia University